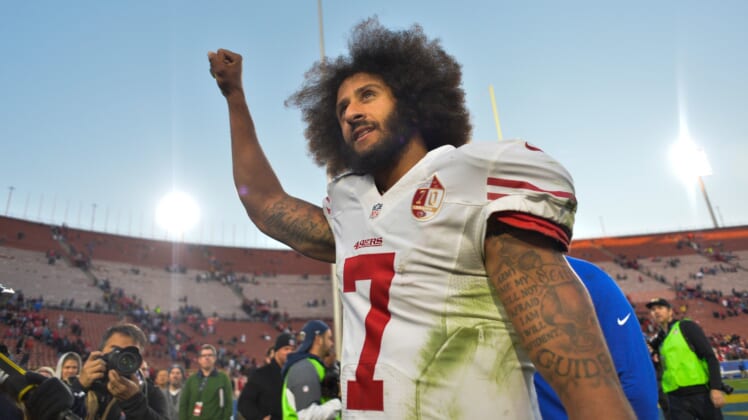 Former Super Bowl quarterback Colin Kaepernick has not thrown a pass in the NFL since the 2016 season. By now, most of you know that Kaepernick started the now-infamous national anthem protests that summer.

Since then, the talented 33-year-old signal caller has remained away from the league. Kaepernick claims that he has been black-balled by the league and settled out of court after alleging collusion on the part of the NFL and its teams.

With the quarterback’s career is now pretty much a thing of the past, Kaepernick once again finds his name in the news. It comes via Madden 22.

TMZ Sports reported earlier on Thursday (since confirmed by multiple outlets) that Colin Kaepernick actually has a higher rating in this year’s version of the EA Sports franchise than half of the current starting quarterbacks in the NFL. That includes some big name signal callers.

The interesting thing here is that Kaepernick’s speed rating is below Herbert and Lawrence. That’s where the quarterback made most of his damage during his six-year career with the San Francisco 49ers.

Is Madden 22 making a point with Colin Kaepernick rating?

If you take all of this into account, there’s absolutely no reason why Kaepernick should have a higher rating than the quarterbacks mentioned above.

Last season alone, Herbert threw for 4,336 yards with 31 touchdowns and 10 interceptions for the Los Angeles Chargers en route to winning NFL Offensive Rookie of the Year honors. Cousins is averaging north of 4,200 yards with 29 touchdowns and 11 interceptions since the start of the 2015 season. Meanwhile, Lawrence is coming off one of the best collegiate careers for a quarterback in modern history.

Perhaps, EA Sports and Madden are attempting to make a point. There’s also a chance that they are catering to those who support Kaepernick in his continued and legitimate fight for equality within the United States.

Either way, this is a rather interesting backdrop when it comes to Madden 22.