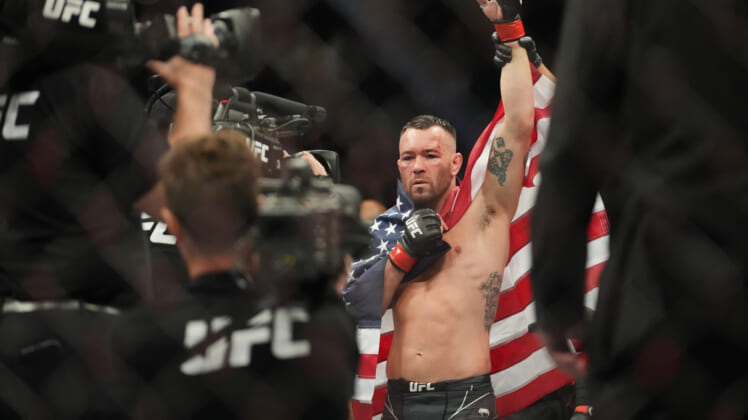 Colby Covington believes that if Dustin Poirier wants to become a contender in the welterweight division, the former interim lightweight champion needs to focus less on a long-sought-after fight with a “crippled” Nate Diaz, and step up to face him.

Over the last few months, former American Top Team teammates Covington and Poirier have traded barbs in the media about a possible fight. Following his impressive win over Jorge Masvidal at UFC 272 earlier this month, Covington publicly pushed for a scrap with his newest industry rival. However, a matchup with Covington in the cage isn’t “Diamond’s” primary focus.

Since January, he and UFC superstar Nate Diaz have publicly campaigned to make a fight between them happen sooner than later. Yet despite both saying they want that bout next, the promotion has not set a date. Poirier is in the back end of a memorable career, does not want to cut weight to make 155-pounds, is looking to cash in on Diaz’s popularity, and take part in what would be a highly entertaining fight at welterweight. For him, a fight with Diaz makes all the sense in the world.

However, Covington said in a Wednesday interview with Submission Radio that if Poirier is genuine about his hope to contend for championships in the UFC, a fight with a damaged competitor like Diaz doesn’t make sense. And he should take on the challenge of the No. 1 ranked fighter in that division.

“Why is he trying to pick on the guy in the corner, who has a lisp, that’s mentally handicapped and crippled? Nate Diaz is crippled, mentally and physically,” Covington said. “That guy shouldn’t even be fighting anymore. So Dustin wants to pick on the crippled dude that has the lisp, Nate Diaz, why don’t you come fight the man? I’m the No. 1 guy in the division.

“I thought you were telling the media, ‘Oh, my hopes and dreams, and my title aspirations. Twenty-five minutes paid in full.’ If you want to come to 170, and you want the title, you’ve got to go through me,” he added. “I am the title. I’m the biggest fight he can get.”

While Poirier has stated publicly he would have no problem scrapping with “Chaos,” it wouldn’t be a fight in the Octagon. Instead, it would be a battle away from fan view, to make him pay for the comments he has made about his wife and family in recent months. Yet, Covington also claims that would be a bad move for Poirier because he would put his former teammate into a coma if they fought on the street. So if he is going to fight him he might as well get paid to lose.

“He’s the one who’s saying, ‘Oh, if we fought in the streets we’re both going to jail.’ Dustin, I thought you wanted to be a family man? I thought you loved your kid, loved your wife? If you love them then you’re not gonna come fight be in the streets because I’m gonna leave you in a coma,” said Covington. “You’re not gonna be the same person when I drop you on your head. At least come get paid for it.”

Poirier last fought in December in the main event of UFC 269. On that night, his three-fight win streak was ended in a title fight loss to defending lightweight champion Charles Oliveira.