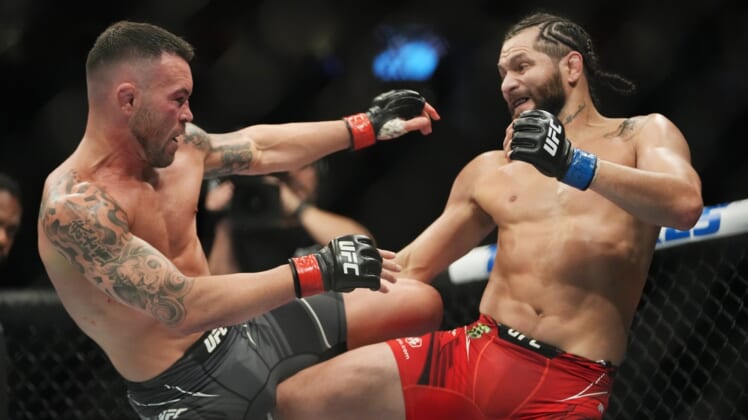 The dislike went back and forth between Colby Covington and Jorge Masvidal in the buildup to the fight. But once it got started, the traffic went one way — Covington dominated the bout en route to a unanimous decision on the scorecards: 49-46, 50-44 and 50-45.

Covington (17-3) is a relentless wrestler with a deep gas tank and an underrated striking game, and all of this was on display in a rinse-and-repeat performance over five rounds.

The veteran Masvidal (35-16), who looks on the downside, had flashes of his former self and even dropped Covington to one knee with his best punch of the fight in the fourth round, but he never got anything sustained going.

Covington has won nine of his past 11, with the two losses coming to UFC welterweight champion Kamaru Usman. Masvidal has dropped three in a row.

In the evening’s co-feature bout, Renato Moicano showed great heart in taking a fight with former UFC lightweight champion Rafael dos Anjos on five days’ notice and flying in from Brazil for a five round, 160-pound catchweight fight.

Dos Anjos dominated all aspects of the fight from the jump.

In the third, Dos Anjos landed a perfect head kick, then laid down a hellacious beating on the mat. Moicano somehow made it to the end of the round. With his left eye nearly swollen shut between rounds, the ringside doctor examined him and inexplicably cleared him to continue.

Dos Anjos dominated again in the fourth, and the doctor again cleared him. Dos Anjos noticeably took his foot off the gas pedal in the fifth and cruised to seal his 20th career UFC win.