Coby White’s days with the Chicago Bulls appear numbered. Bleacher Report’s Jake Fischer recently noted that Chicago is shopping White, its 2019 first-round draft selection. That is partially due to the team’s recent influx of guards (if re-signed, Zach LaVine is joined by Lonzo Ball, Alex Caruso and Ayo Dosunmu).

While White has fallen out of favor in Chicago’s rotation, he can make a difference elsewhere. The University of North Carolina product is adept at shooting off the dribble, generating ball movement and provides some size at 6-foot-5.

Related: NBA Draft trades we could see in 2022

3. Coby White to the Utah Jazz

Coming off another playoff let down, the Jazz need to take some chances and get creative this offseason. Chicago offers Utah the chance to get funky.

Utah needs to get faster. White helps the Jazz do that much. He gives them a capable shooter and ball-handler to pair with Donovan Mitchell in the team’s backcourt. White can hit abrupt, long-range jump shots in halfcourt sets and three-pointers in transition.

White’s strong suits are a viable complement to Mitchell, who’s accustomed to attacking off the dribble. Meanwhile, the Jazz add a new dimension to their offense in getting Vucevic, a big man who can step outside for mid-range and perimeter jump shots.

Utah can send Gobert and Alexander-Walker to Chicago for White and Vucevic. The Jazz shake up their offense while the Bulls improve their interior defense and add a young wing scorer.

All that said, the Jazz may prefer not to make a blockbuster trade that forces them to make subsequent moves. This trade likely leads to Mike Conley’s departure for an underwhelming return with the Jazz losing leverage in having White. 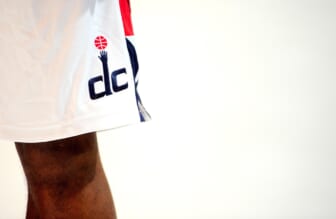 2. Coby White to the Washington Wizards

First and foremost, the Wizards need to re-sign Bradley Beal. Working under the mindset that they retain the former Gator, point guard is Washington’s most pressing need. White can be their answer.

The No. 7 pick in the 2019 NBA Draft adds much-needed scoring to head coach Wes Unseld Jr.’s rotation. White can roam the perimeter while Beal and Kristaps Porzingis attract the bulk of defensive attention. When Beal attacks the basket, White will be open for clean perimeter looks.

Washington has never had everyone on the court at the same time. A starting five of White, Beal, Porzingis and two of Kyle Kuzma, Rui Hachimura and Daniel Gafford would make for a unit that does damage on the offensive end. They’d have a combination of versatile scorers and/or players sturdy in their respective niche.

Washington can send Avdija, Smith and a future second-rounder to Chicago for White. The Wizards get their starting point guard while the Bulls get a former lottery pick and a respectable veteran point guard. Furthermore, the Wizards would still have the No. 10 pick in the draft.

All that said, the Wizards may value trading for a proven point guard and/or drafting a lead guard over acquiring White.

1. Coby White to the Atlanta Hawks

The Hawks have a lot of roster and trade flexibility. Regardless of Atlanta’s intentions with players like John Collins, Bogdan Bogdanovic and Clint Capela, White fills a void for head coach Nate McMillan’s rotation.

Yes, Trae Young is enough offense on his own for a starting backcourt. At the same time, the Hawks could use another wing scorer and ball-handler next to Young. That’s where White enters the picture.

White presumably comes off the Hawks’ bench, playing 25-30 minutes per contest. He’ll lead the second unit, serving as a scorer and facilitator. White can also be on the floor at the end of games given his shooting ability. He’s another player who can feed off the attention Young attracts.

White’s offensive arsenal strengthens a strength for the Hawks, providing a vibrant upgrade to their backcourt rotation. He’d be a savvy pickup. 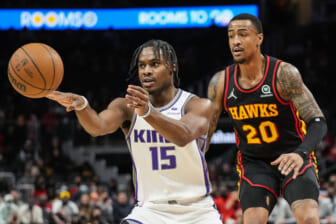 Atlanta can send Johnson, Cooper and the No. 44 pick in the 2022 NBA Draft to Chicago for White. The Hawks further enhance their offense while the Bulls get most notably a pair of talented, second-year players who need a change of scenery.