Roger Federer likely won’t play in the Australian Open for a second straight year as he continues to recover from knee issues, his coach said.

Ivan Ljubicic told Stats Perform that the 40-year-old is working toward a return to tennis but chances are slim it will happen in January in Melbourne.

Federer’s only appearance in 2020 came at the Australian Open before having two surgeries on his right knee. The Swiss great played a limited schedule in 2021; he achieved a 9-4 record before having another knee operation following a loss in the quarterfinals of Wimbledon in July.

“I think there are very few chances, he is still recovering and knowing him, he wants to be sure he can play to win the tournament and be at 100 percent,” Ljubicic said. 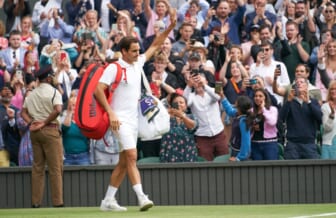 “So I think the Australian Open is not a real possibility right now. But he will go step by step because he is 40 years old now and he needs to be patient. He cannot recover as quickly as he used to.”

Federer is tied with Rafael Nadal and Novak Djokovic for the most all-time wins in Grand Slam tournaments with 20. In September, Federer was working toward a 2022 return.

“The worst is behind me, I’m looking forward to all that is coming up,” he said, speaking in Zurich during a sponsor event.

Ljubicic said he expects that will happen.

“We have spoken and I can guarantee he wants to return to playing tennis,” Ljubicic said. “When he decides to stop he will retire, but I don’t think it’s going to happen all of a sudden.”