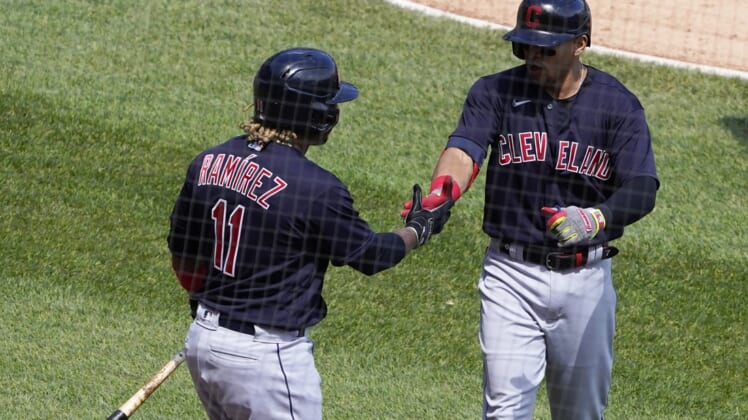 Cesar Hernandez and Jose Ramirez homered to back a combined four-hit shutout from starter Zach Plesac and three relievers as the visiting Cleveland Indians earned a 5-0 win against the Chicago White Sox on Sunday.

The Indians took two of three in the series while winning for the fifth time in seven games. Amed Rosario led Cleveland’s nine-hit attack by going 3-for-4 with an RBI, while Eddie Rosario, Hernandez and Ramirez collected two hits apiece.

The White Sox were blanked for the second time this season, both by Cleveland. None of Chicago’s hits went for extra bases. Andrew Vaughn singled twice.

Plesac (2-3) pitched 5 2/3 shutout innings to defeat the White Sox for the first time in three tries in 2021. The right-hander scattered three hits and four walks and tallied six strikeouts.

Hernandez staked Cleveland to a 1-0 lead with a solo home run in the third inning before Cleveland added an unearned run in the fourth. Ramirez drilled a two-run shot against Codi Heuer and Amed Rosario had an RBI single as the Indians put the game away with a three-run seventh.

White Sox center fielder Luis Robert suffered a strained right hip flexor upon beating out an infield single in the first inning. Robert stumbled to the ground after reaching first base and initially was unable to rise to his feet. He left the field with the aid of first base coach Daryl Boston and head trainer James Kruk.

The White Sox confirmed that X-rays were negative and said Robert will undergo further evaluation Monday.