Cleveland Browns rookie linebacker Jeremiah Owusu-Koramoah was activated off injured reserve on Saturday and is in line to play Sunday against the host New England Patriots.

Owusu-Koramoah missed the Browns’ past three games after sustaining a high-ankle sprain in Cleveland’s 37-14 setback to the Arizona Cardinals on Oct. 17.

Owusu-Koramoah, 22, has recorded 29 tackles, a forced fumble and a half-sack in six games (five starts) since being selected by the Browns in the second round of the 2021 NFL Draft from Notre Dame. 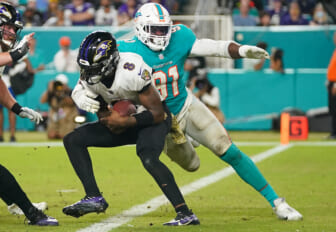 Stewart, 26, has 11 tackles in five games this season.

Hill, 26, will serve as the backup to D’Ernest Johnson on Sunday. Fellow running back Nick Chubb was ruled out due to his positive test for COVID-19, coach Kevin Stefanski said Friday.