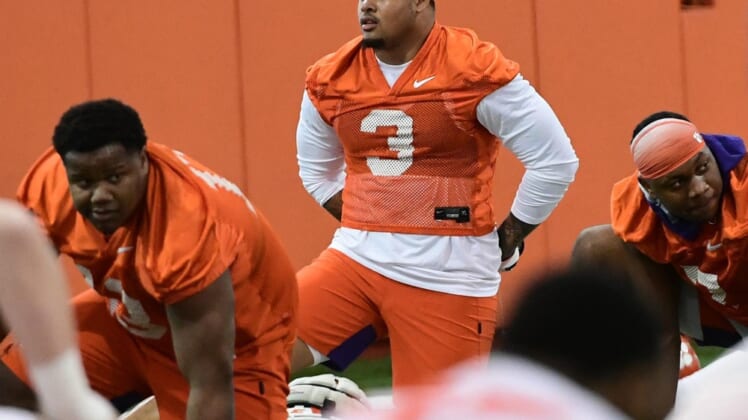 If the 2020 college football season is indeed played this fall, one of the top national championship contenders will be without a vital cog on the defensive side of the ball.

“We get back going with our mandatory stuff and it’s pretty obvious early on that he’s nowhere near where he needs to be to play football,” Swinney said, via the Greenville News. “The No. 1 thing is for these guys to be healthy and the last thing we want is for X (Thomas) to go and try to be half of his potential.”

The head coach did say that Thomas could opt to turn pro in 2021, but expects the defensive end back next season.

Thomas was the No. 3 overall recruit in the nation back in 2018, according to 247 Sports. He had received offers from the likes of Alabama, Notre Dame, Georgia, Michigan and Oregon before deciding on the Tigers. He’s recorded 16.5 tackles for loss and five sacks in two seasons with Clemson

The Tigers are slated to open their season Sept. 12 against Wake Forest. They then have three weeks off before going up against Virginia due to the new schedule taking into account the ongoing COVID-19 pandemic.

The expectation here is that said schedule will change to move up some of the games later in the slate. Clemson’s biggest game of the season comes against Notre Dame on Nov. 7. The very first coaches poll of 2020 has Clemson ranked No. 1 with the Irish rounding out the top 10.