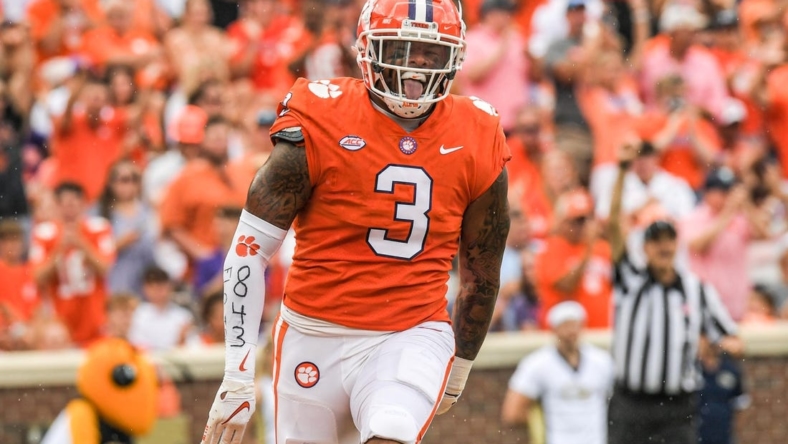 Clemson starting defensive end Xavier Thomas will miss the rest of the season after re-injuring the foot that he originally hurt during a scrimmage in August camp.

The news is another blow to a Clemson team that just incurred its first loss and is struggling mightily on offense behind starting quarterback DJ Uiagalelei.

Swinney said Thomas can decide whether to return to the Tigers as a sixth-year senior or prepare for the 2023 NFL Draft.

“So if he does decide to come back to Clemson, he’s ready to go for spring practice and all that,” Swinney said. “And if he does go ahead and go pro, then he’s fully ready for the combine and he’s got no limitations and all those things. But man, your heart goes out to him.”

Thomas took to social media late Monday, saying “the bone that was broken & healing and was close to being 100% recracked in practice.” He added he’ll have the surgery next week.

From the bottom of my heart, Im so sorry Clemson Nation.. so much out of my control with my foot breaking this year. The bone that was broken & healing and was so close to being 100% recracked in practice. Have to get surgery next week. God NEVER makes mistakes! I love you all?? https://t.co/ElCMbAwjLz

Whether Swinney will operate on his offensive depth chart in the near future appears to be on the table.

Following a demolition at the hands of unranked Notre Dame last Saturday, Clemson lost a grip on the College Football Playoff. The Tigers were No. 4 in the initial CFP rankings last week.

Next up for Clemson is Louisville this Saturday. And Swinney said Tuesday that the issues at quarterback are front and center for the Tigers in their final three games. Uiagalelei has been put on alert.

“If he doesn’t play better, we’ve got to give somebody else a chance,” Swinney said. “That’s just where we are.”

Uiagalelei went 27-of-39 passing for 191 yards and a touchdown with an interception against Notre Dame. He was briefly benched in favor of Cade Klubnik for a second consecutive game.

Thomas missed the first five games of the season, finally returning Oct. 8 against Boston College. Thomas recorded two sacks in six snaps. Thomas played in the next two games but was sidelined in last Saturday’s loss to Notre Dame.