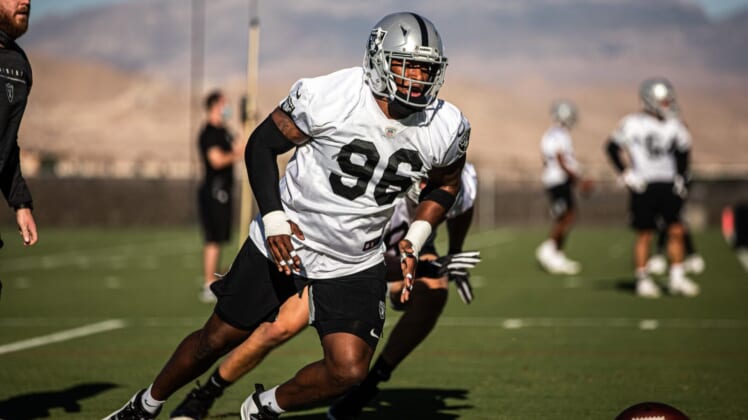 The number four overall pick of the Las Vegas Raiders Clelin Ferrell says he heard but tuned out criticism during his rookie season and that it made him a stronger, better player.

Those high expectations, and lack of quarterback sack numbers, have soured many on Ferrell who is keeping it all in stride as he enters his second training camp in the silver and black.

“I never listened to what people had to say,” Ferrell said of the buzz around his rookie campaign. “Even though, you know, you hear it – you definitely here it. But for me, nobody knows what I know, what we know, internally as a team.”

Clelin Ferrell, who finished the 2019 season with 4.5 sacks last year, has kept the criticism and doubt in stride.

“You know, a hater is someone who doesn’t wake up every day and do what you do, but they can speak every day on what you do,” Ferrell said. “I just block a lot of that stuff around and I know I had a good rookie year regardless what anyone had to say about me.”

Clelin Ferrell says his rookie season was one of growth both on and off the field. His new experience as a member of the Raiders and a professional player has helped him grow and get ready for an even better year.

“Last year was tough,” Ferrell said. “Coming from such a successful college and me having to deal with the things I did during my rookie year…I learned a lot about my mental toughness.”

Ferrell said the defenses camaraderie during these tough times is being forged by young players like him and Maxx Crosby showing leadership.

“I feel like I’ve been a leader since day one walking in,” Clelin Ferrell said.

His defensive coordinator Paul Guenther likes what he sees in his second-year player.

“Clelin had a lot of snaps last year,” Guenther said. “He’s come back in tremendous shape. He looks like a different guy. He’s a lot quicker, he’s a lot stronger. I’m looking for big things from Clelin this year.”