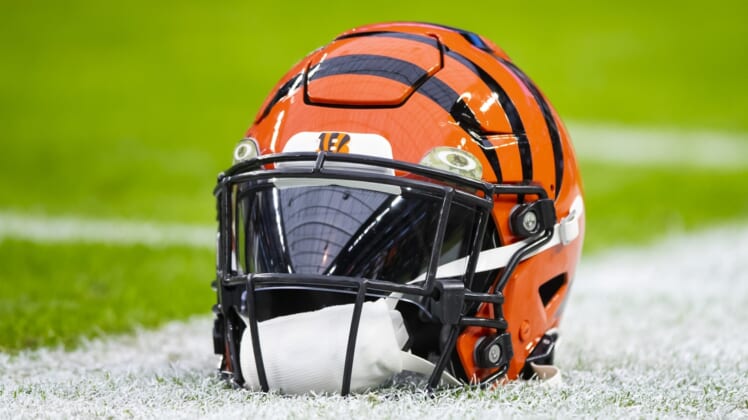 Coming off a shocking appearance in the Super Bowl, these Cincinnati Bengals look to be perennial contenders with young quarterback Joe Burrow in the mix.

Cincinnati’s front office has also exhausted a ton of cash and free-agent capital to find protection for Mr. Burrow after he was sacked seven times in the Bengals’ Super Bowl loss to the Los Angeles Rams.

More than providing Burrow with three upgrades on the offensive line, this also gives Cincinnati a ton of avenues to pursue during the 2022 NFL Draft. Before we provide you with our full seven-round Cincinnati Bengals mock draft, let’s check in on the selections the reigning AFC champions boast in the annual event.

Young head coach Zac Taylor worked wonders with an equally young Bengals roster a season ago. In no way does this mean Cincinnati’s roster is complete. With eight selections in the 2022 NFL Draft, there’s a lot of room for improvement.

Among the Bengals’ biggest needs, guard still must be addressed after they signed Alex Cappa away from the Tampa Bay Buccaneers. Tight end, linebacker and cornerback also must be seen as needs.

Even after adding Cappa and Ted Karras to the interior of their offensive line, the Bengals still need to find a starting left guard to go to battle with. After all, Burrow was sacked a league-high 51 times during the 2021 regular season. He also went down a whopping 19 times in four playoff games.

Enter into the equation a pro-ready Green. The dude dominated during his career with the Aggies and has All-Pro potential. His athleticism will also help as the Bengals look to get outside with Joe Mixon at running back. Similar to the Chiefs revamping their offensive line last season, the Bengals would be looking at four new starters next season if they made this pick.

How about the Bengals get Burrow yet another dynamic weapon to go with Ja’Marr Chase? The team lost top tight end C.J. Uzomah in free agency. And while Cincinnati did sign Hayden Hurst, tight end remains a major need.

Likely (6-foot-4, 240 pounds) would be a catch-first tight end who excels in open space and utilizes elite-level athleticism to dominate opponents. Last season alone with Coastal Carolina, he registered 59 receptions for 912 yards and 12 touchdowns in 13 games.

It’s rather simple. Cincinnati can’t rely on Eli Apple to be a legitimate starting cornerback. While adding a rookie in the third round of this Bengals mock draft wouldn’t immediately fix the issue, it’s a major need.

At 6-foot-2, Emerson is a perfect fit in defensive coordinator Lou Anarumo’s system. He’s physical at the line and displayed shutdown ability. At the very least, the big-bodied corner could make an initial impact as a nickel guy.

Cincinnati did place the franchise tag on Jessie Bates this offseason. In no way does this mean he has a long-term future with the Bengals. We’ve seen this story play out over and over again with Cincinnati’s brass failing to re-sign their internal players to lucrative long-term deals.

At the very least, the Bengals should have a back up option here. That’s where Weatherford comes into play. He’s what we’d call a hybrid safety that can play both positions and even line u in the box at linebacker. Even if the Bengals retain Bates long-term, Weatherford could be used in sub packages.

Let us know what you think about our full seven-round Cincinnati Bengals mock draft in the comments section below.