The 2016 NFL season is just around the corner. As such, Sportsnaut will be previewing all 32 teams before the games begin in September. Continuing the series, we continue with the AFC North to visit the defending division champion Cincinnati Bengals — a team that’s in need of proving its worth in the second season.

It seems a bit absurd that Lewis is now the second longest-tenured head coach in the NFL. Here’s a man that has failed to lead the Bengals to a single playoff win in seven trips to the playoffs, including five consecutive one and done’s over the past five years.

Following last season’s meltdown by the river against the Pittsburgh Steelers, many figured Lewis would be out of a job. Instead, Cincinnati’s brass decided to extend the long-time head coach.

Though, there has to come a time here soon where even a bling squirrel realizes his nut is empty. What would it take for the Bengals to fire Lewis during or after the 2016 season? Another first-round exit? Missing the playoffs altogether?

In reality, it really should be Super Bowl or bust for this team. The talent is there to compete with the big boys. The past regular season success (43 wins past for years) speaks for itself. It’s now all about that second season.

2. Can they find a decent balance on the ground? 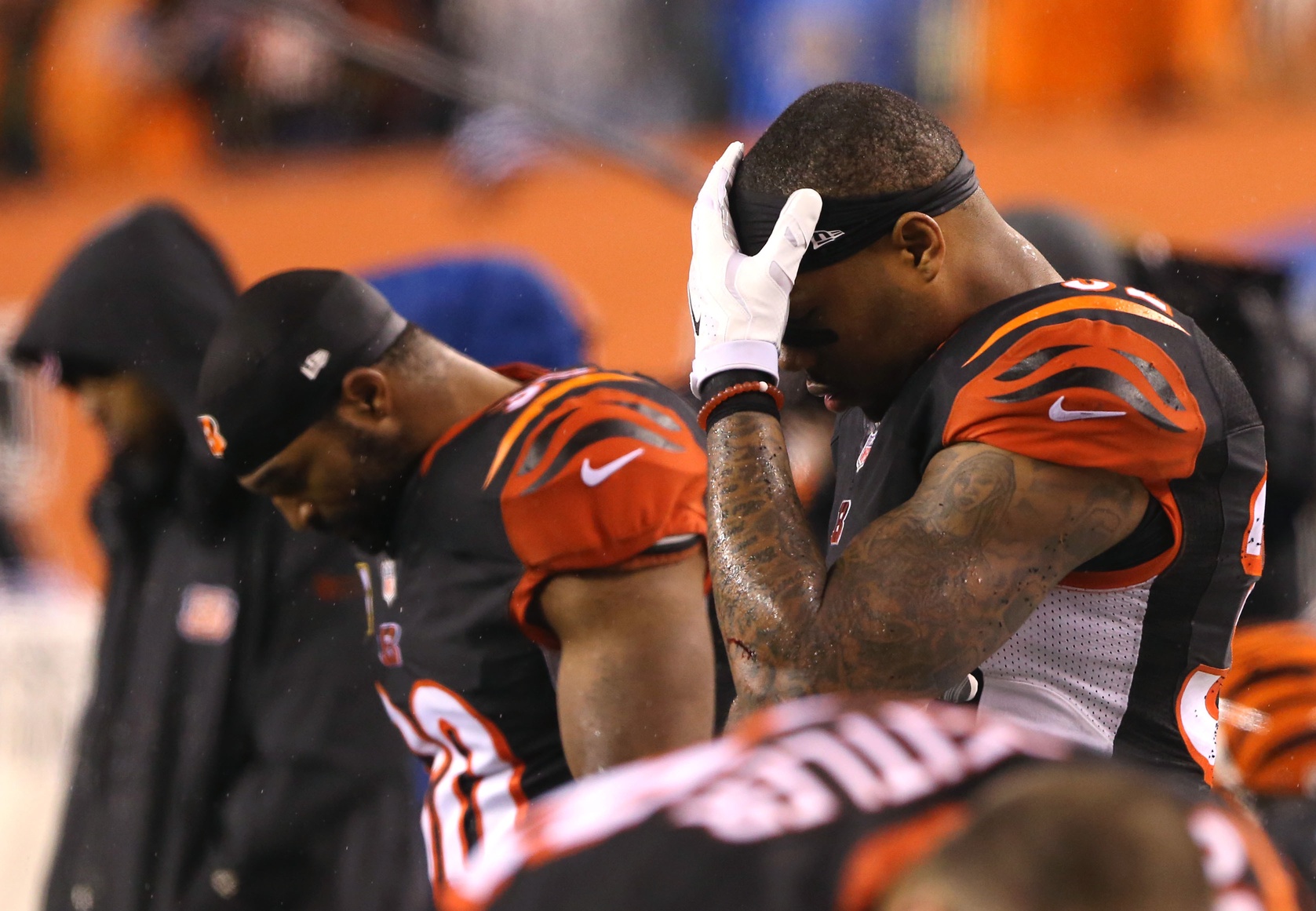 To say that Jeremy Hill struggled last season would be an understatement. The former second-round pick averaged just 3.6 yards per carry and found himself benched multiple times due to ineffectiveness and fumble issues.

Despite this, Cincinnati decided that it made sense to continue giving him consistent touches. That’s one of the many reasons Bengals fans should be concerned about this staff.

As it is, Cincinnati does have a more-capable running back than Hill on the roster. That comes in the form of fellow former second-round pick Giovani Bernard, who has put up 1,000-plus total yards in each of his first three NFL season.

If the Bengals can find it within themselves to rely on Bernard more this season, Andy Dalton should be given the necessary balance to succeed on offense.

3. How will the secondary look?

Both of these youngsters were being relied on to perform at a high level in a revamped Bengals’ secondary this season. At the very least, it looks like Dennard’s injury is minor.

He should join Adam Jones and Dre Kirkpatrick to form a solid trio of cover guys for Cincinnati. And in reality, that’s going to be absolutely huge for this team.

Last season saw the Bengals finish with the NFL’s 20th-ranked pass defense. Though, it allowed a substandard 78.9 quarterback rating — the fifth-best mark in the league. If the team can repeat this performance, it will be in good shape.

As we mentioned above, it makes absolutely no sense that Bernard saw less carries than Hill last season. The stats tell us a story of one being much more productive than the other.

The best bet here would be to use Hill more in the goal-line situations while giving Bernard 20-plus touches. If the Bengals find a way to do that, their offense should be golden in 2016.

After earning a playoff spot in each of the past four seasons, the pressure is definitely on in Cincinnati to actually have some success in the playoffs. With that said, there’s talent across the board on this team.

Dalton is coming off a career-best campaign that saw him put up 25 touchdowns compared to seven interceptions while placing second overall in quarterback rating behind Russell Wilson.

With an improved rushing attack, the balance this team might display on offense could be the difference. That would only be magnified if Dalton and A.J. Green find a way to reconnect after a down 2015 season between them.

Though, it really is on the defense that the talent is here. Carlos Dunlap, Michael Johnson and Geno Atkins are about as intimidating of a defensive line trio as there is in the NFL. And despite his obvious anger issues, Vontaze Burfict has proven to be a Pro Bowl caliber linebacker.

If the Bengals’ secondary can improve a tad off last year’s above-average performance, this unit could push the team to the next level.

Marvin Lewis and Andy Dalton. It really is that simple. Lewis has lost all seven of his playoff games as the Bengals’ head coach. The average score in said games stands at 25-13.

Meanwhile, Dalton has been an absolute disaster in the playoffs. Prior to missing last year’s wild card loss to Pittsburgh, the former second-round pick had thrown one touchdown compared to six interceptions for a 57.8 quarterback rating in four playoff starts (all losses).

It really doesn’t matter what Cincinnati does in the playoffs. It could win 14 games. It could go undefeated. If this duo doesn’t get out of its playoff rut, the Bengals will find themselves without a playoff win for the 26th consecutive season.