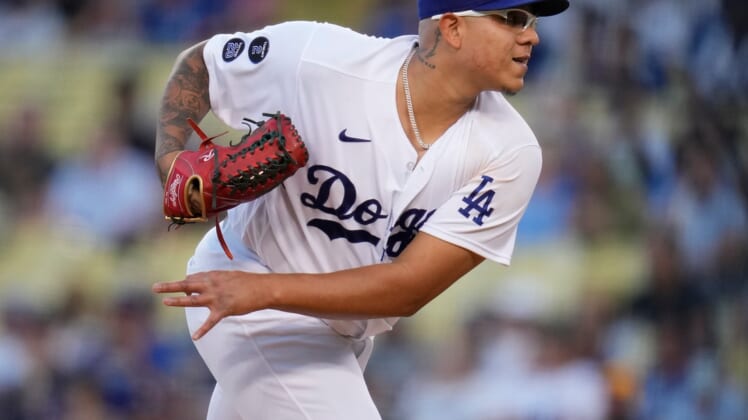 Moments after complaining that his hitters failed to make adjustments in Game 1 of the National League Division Series, Los Angeles Dodgers manager Dave Roberts took matters into his own hands Friday night and made one himself.

The Dodgers will have a new center fielder and first baseman in the lineup on Saturday night when they attempt to avoid a second straight loss to the host San Francisco Giants to begin the best-of-five series.

After watching first baseman Matt Beaty typify the Dodgers’ effort in a 4-0 loss Friday with two groundouts and a strikeout, Roberts announced postgame that center fielder Cody Bellinger would be moved to first base for the rematch, with Chris Taylor taking over in center.

It’s not only a response to being shut out by San Francisco right-hander Logan Webb and two relievers in the opener, but also an attempt to replace the power and Giants-killing normally provided by Max Muncy, who will miss the series due to a dislocated left elbow.

Roberts said of Muncy, who hit 36 home runs and drove in 94 runs during the regular season, “He’s a threat. He gets on base. He can drive runs in. When you’re talking about games like this, every base matters and keeping the line moving.”

Taylor did more than just that in the Dodgers’ wild-card win over the St. Louis Cardinals on Wednesday. It was his walk-off, two-run homer that propelled Los Angeles into the duel of baseball’s two biggest winners.

Both teams are missing their high-powered first basemen in the series. But while the Dodgers managed just three singles and two doubles in the series opener, the Giants made up for the absence of Brandon Belt with 20 hits, including home runs from San Francisco mainstays Buster Posey and Brandon Crawford plus newcomer Kris Bryant.

With the new look, the Dodgers will face Giants right-hander Kevin Gausman (14-6, 2.81 ERA), who went winless in his last four regular-season starts. The All-Star did finish strong nonetheless, limiting the Colorado Rockies and San Diego Padres to a total of two runs in 13 innings with 16 strikeouts in his last two outings.

Gausman, 30, went 1-1 with a 3.21 ERA in three starts against the Dodgers this season, making him 1-3 with a 3.99 ERA against Los Angeles in eight career meetings, including seven starts.

The second-year Giant won’t be sad about the absence of Muncy, who has bombed him for three homers in 15 career at-bats.

The stretch included a 6-1 win at San Francisco on Sept. 4, a game in which Urias limited the Giants to one run in 5 2/3 innings. The 25-year-old started five games against the Giants this season, going 2-1 with a 3.38 ERA. The Dodgers lost three of the five.

Urias has served up two homers to Belt in his career, but none to Posey or Crawford in a total of 36 plate appearances.