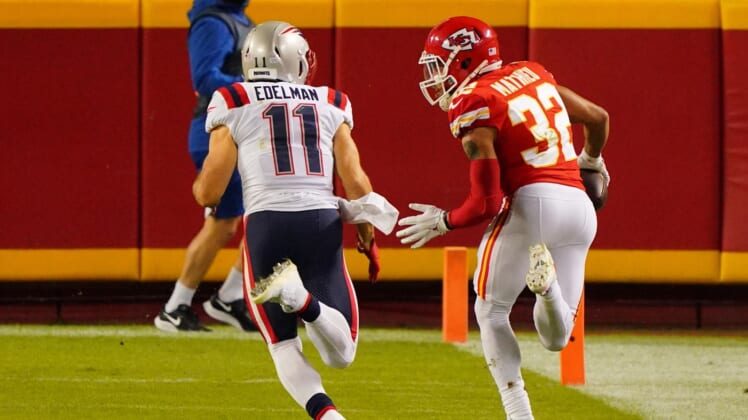 Fresh off a dominating performance over the Baltimore Ravens last week, Kansas City slept through the first 45 minutes of the game before picking it up big time. Its defense also came to play against a talent-stricken Patriots offense.

When all was said and done, the defending champs came out on top by the score of 26-10. Here are the biggest winners and losers from Monday night as the Chiefs moved to 4-0 on the season.

This former Alabama standout saw just four rush attempts as a rookie last season. A third-round pick back in 2019, Harris also missed the first three games of his sophomore campaign with a finger injury. Now that the Patriots are growing sour on injured back Sony Michel, Harris was finally given an opportunity to prove his worth Monday evening. He more than showed Bill Belichick and Co. what they might have moving forward.

Harris tallied 100 yards on 17 rush attempts for an average of 5.9 yards per attempt. This led a rushing attack that went for 185 yards behind the combination of Brian Hoyer and Jarrett Stidham. At the very least, it kept New England close with Cam Newton sidelined. The Pats have also gone for an average of 180 rushing yards in four games this season. It will be needed moving forward.

Once this game was rescheduled after Cam Newton tested positive for COVID-19, some thought had to be given to start Stidham over his veteran counterpart. After all, the second-year quarterback was the odds-on favorite to replace Tom Brady before Newton signed late in the offseason. Struggles behind the scenes in New England led to Stidham finding himself in Belichick’s doghouse.

Getting the start, Hoyer was absolutely brutal through the first three quarters Monday evening. He threw an interception in the opening stanza and lost a fumble with New England driving at the Chiefs 10-yard line down just 6-3 in the third quarter. Kansas City would turn around and drive 85 yards for a touchdown and a two-score lead. Meanwhile, Stidham’s first NFL pass went for a touchdown after he replaced Hoyer under center. It was not enough for the Patriots to come out on top here. One now has to wonder who will start Week 5 should Newton remain sidelined.

It’s pretty stunning that Kansas City was held without a touchdown for nearly the first 45 minutes of Monday night’s game after what we saw from this offense last week against the Baltimore Ravens. Things looked stagnant. Patrick Mahomes was not in rhythm. Whatever the reason, the Chiefs struggled finding momentum during a game that was rescheduled from Sunday. Hill changed that on a dime late in the third quarter.

This jumpstarted the Chiefs’ offense. They’d go on to score another touchdown on their next possession to pretty much put the game away. All said, Hill caught just 4-of-6 passes for 64 yards. However, it was this one touchdown that made a major difference. It also represents the fourth consecutive game that Hill has scored a touchdown to open the season for the undefeated Chiefs.

To say that the Patriots needed their veteran receiver to step up during Monday night’s game would be an understatement. Without their starting quarterback and lacking any real experience behind Edelman, he needed to come to play. In no way did that come to fruition. Edelman caught all of three passes for 35 yards on six targets. This drop in the fourth quarter also led directly to a pick-six, putting the game away in the process.

A player who led the NFL in drops last season, Edelman now seems to be a shell of his former self without Tom Brady tossing him the rock in New England. You can’t make a mistake like this and expect to beat the defending champs. Unfortunately for the Patriots, it was one of many similar mistakes Monday night that doomed the team to a 2-2 start to the season.