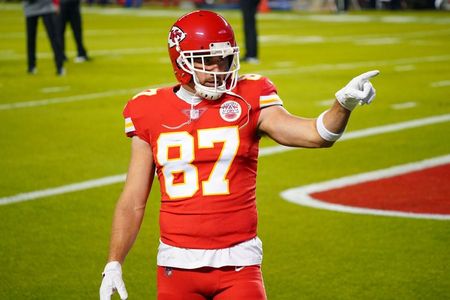 Patrick Mahomes completed 25 of 40 passes for 318 yards and a touchdown Sunday as the Kansas City Chiefs clinched a playoff berth by outlasting the Denver Broncos 22-16 at Kansas City, Mo.

The Chiefs (11-1) failed to score TDs on their first four trips into the red zone, settling for field goals from Harrison Butker and allowing the Broncos to maintain their upset hopes behind their tough defensive effort.

Down the stretch, however, Mahomes and the Chiefs controlled the clock to reach the playoffs for a sixth consecutive time while also clinching at least a share of their fifth straight AFC West title.

Drew Lock engineered a time-consuming 6-minute, 42-second touchdown drive he capped with a 10-yard strike to Tim Patrick to give the Broncos (4-8) a 16-12 lead with 3:50 left in the third quarter.

The TD was the second for Patrick. Lock, who went 15 of 28 for 151 yards passing, was intent on engineering an upset after the Broncos never trailed in the first half. Melvin Gordon also provided a spark with 131 yards rushing.

It was an impressive offensive turnaround from the previous week when no Denver quarterbacks were available in a loss to New Orleans because of COVID-19 complications.

However, a decision to punt while facing fourth-and-3 at the Denver 49 enabled Mahomes to take over with 6:07 left. The Chiefs whittled time down to 1:04 when Butker connected on his fifth field goal, from 48 yards, for the final margin.

Travis Kelce led Kansas City’s receivers with eight for 136 yards and scored the Chiefs’ only touchdown on a 20-yard grab in the third quarter.

Denver, meanwhile, rode the legs of Gordon, who rushed for 105 first-half yards, including a 65-yard burst that set up a 5-yard touchdown pass from Lock to Patrick with 6:26 left in the half. Brandon McManus also connected on a 53-yard field goal.