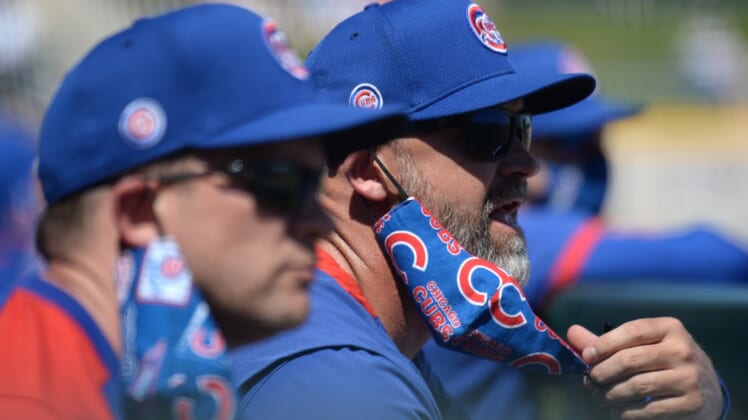 The Chicago Cubs and Milwaukee Brewers go into a series opener Monday at Wrigley Field moving in opposite directions.

It’s been only three games for each, but the Cubs have won two in a row to take a series against Pittsburgh after dropping their season and home opener.

Milwaukee did the opposite, winning its season and home opener before falling twice in a row against Minnesota.

The Brewers were shut out and then scored only twice in Sunday’s 8-2 loss.

“We have to do better against starting pitchers,” Milwaukee manager Craig Counsell said. “Our starters pitched pretty good; we just couldn’t get a lead ever.”

Williams, 28, is entering his sixth big-league season. Last season with his original club, Pittsburgh, he led the Pirates in starts and innings pitched and ranked second in strikeouts with 49, but those weren’t the telling stats. He went 2-8 with a 6.18 ERA in those 11 starts that totaled 55 1/3 innings.

That was far off his breakout performance in 2018, when he got the baseball world’s attention with a 1.38 ERA over the second half of the season.

Williams, who signed a one-year, $2.5 million deal with Chicago, is 3-3 with a 3.09 ERA in nine career appearances against Milwaukee, eight of them starts.

He has lost his two most recent starts against the Brewers. In fact, all three of his career wins against them came during that sparkling 2018 run.

“The one thing I can say about Trevor is he’s got a history of taking the ball and giving innings,” Cubs manager David Ross said. “That’s definitely a feather in his cap.”

Anderson, entering his second season with Milwaukee, was 4-4 with a 4.21 ERA last season.

He’s not a fireballer like teammates Corbin Burnes and Brandon Woodruff, and that’s OK with him.

“Corbin and Woody, their stuff is so good it doesn’t really matter what arm they pitch (with),” Anderson said. “So it is nice to be a little different, to be left-handed, just to change up the look.

“You never want to have too many of the same guy because in a three-game series it might come into play.”

Anderson, 33, is the only lefty in the Milwaukee rotation. He didn’t start training camp on time because of severe weather in Texas followed by a COVID-19 quarantine but ended up going 2-1 with a 2.66 ERA in spring training.

Although Chicago’s Ian Happ hit a solo homer and scored twice Sunday, he could be displaced in center field by Jake Marisnick against the left-hander. Marisnick played Saturday.

“I think I’ve got four really good outfielders that we’re going to have to mix and match,” Ross said. “I don’t want Jake to come from swinging the bat pretty well in the spring to sitting and getting stale.

“So we’re just trying to find the right matchups for guys, rotate that through and try to keep everybody fresh, and see what kind of start each guy gets.”