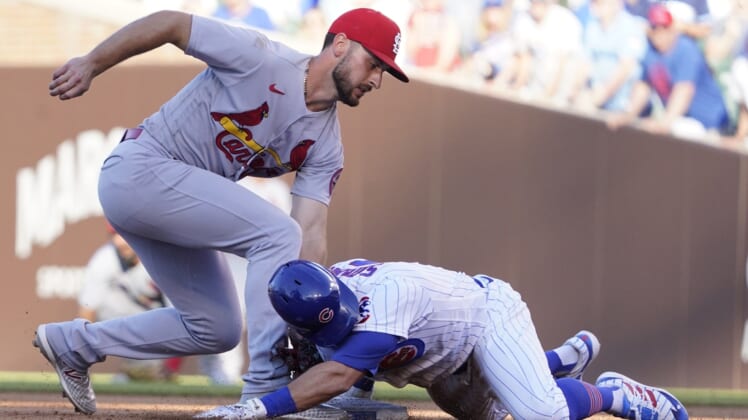 Davies (4-3) held the Cardinals to two hits and two walks while striking out six. Craig Kimbrel struck out the side around one walk in closing out the ninth to earn his 18th save.

The Cubs extended their winning streak to five games and remained tied with the Milwaukee Brewers for the National League Central lead. The reeling Cardinals lost for the 11th time in 13 games and fell into fourth place, six games off the pace.

Carlos Martinez (3-7) suffered the hard-luck loss after allowing just two unearned runs on four hits and one walk in seven innings. He struck out six.

After struggling in his previous two starts — allowing 15 runs in 4 2/3 innings — Martinez settled in to retire the first six batters he faced.

Eric Sogard broke through against him with a leadoff double in the third. He moved to third on Sergio Alcantara’s groundout.

One out later, Joc Pederson hit a potential inning-ending grounder, but Paul DeJong’s error allowed Sogard to score. Singles by Kris Bryant and Anthony Rizzo pushed the Cubs’ advantage to 2-0.

Davies retired the first 13 batters he faced and cruised into the sixth inning — when the Cardinals finally got a runner into scoring position. Matt Carpenter drew a leadoff walk and later moved to second on Martinez’s bunt.

But Davies coaxed an inning-ending groundout from Tommy Edman.

Dylan Carlson led off the seventh inning with a ground-rule double. Tyler O’Neill drew a two-out walk to put the tying run on base and end Davies’ night.

Reliever Ryan Tepera entered and got Yadier Molina to ground out to end the threat.

After Alcantara drew a two-out walk for the Cubs in the seventh and Jake Marisnick reached on Carpenter’s error. But Pederson flied out to strand the runners.

Edmundo Sosa reached second base on Patrick Wisdom’s two-out error in the eighth inning, but Edman flew out to end the inning.