Chicago Bears general manager Ryan Poles is in the initial stages of evaluating his big board with the team now slated to pick No. 1 in the 2023 NFL Draft.

Poles’ first draft in that role did not include a first-round selection after the Bears’ previous brass dealt it away to trade up for Justin Fields in the 2022 NFL Draft.

Having lost 12 of their final 13 games, Chicago surprisingly nabbed the top pick after the Houston Texans defeated the Indianapolis Colts in Week 18.

It could end up being a boon for the Bears with quarterbacks Bryce Young and C.J. Stroud seen as two of the top prospect in the draft. That is to say, entertaining trade-down scenarios to add to their draft pick warchest.

In his season-ending press conference on Monday, Poles addressed a variety of topics with reporters. That included being asked whether Chicago is even entertaining the possibility of drafting a quarterback with the first pick. In a roundabout way, Poles didn’t completely shoot down that option.

“We’re going to do the same as we’ve always done — we’re going to evaluate the draft class,” Poles told reporters. “Aand I would say this: I would have to be absolutely blown away to make that type of decision.”

There’s a lot going on here. We’re headed into the silly time of the NFL calendar with general managers sending smoke screens to other teams. By not completely ruling out a quarterback at one, Poles is hoping other teams up their offers for the selection as trade talks take place over the next several weeks.

In a vacuum, it makes little sense for Chicago to even entertain selecting a quarterback less than two years after former general manager Ryan Pace gave up a bounty to trade up for Fields back in 2021.

After a disastrous rookie season in 2021, Fields upped his game big time for the Chicago Bears as a sophomore. That included putting up the second-most rushing yards for a quarterback in NFL history. Despite this, there’s still some concerns over his ability to be a true franchise quarterback in the modern NFL.

Justin Fields and the Chicago Bears head into an important offseason

This is a major backdrop. Not only does Fields need to improve off a positive performance in 2022, the Bears must get more talent across the board. Poles understands full well that there’s flexibility in this regard.

As for Fields, Poles notes that there’s still a lot for him to work on while acknowledging there’s a need to get the young quarterback more weapons.

“Just for things to slow down mentally and then be able to react and anticipate quicker,” Poles said when asked what more he wants to see from Fields. “Obviously with that, we also have to continue to build around him so that he can do that consistently, as well.”

Darnell Mooney led Bears wide receivers in catches (40) and yards (493) in 2022. That’s not indicative of success in the modern NFL.

In addition to boasting the first pick in April’s draft, Chicago acquired second and fifth-round selections from the Baltimore Ravens in the Roquan Smith trade. This gives the team more options in the annual event. 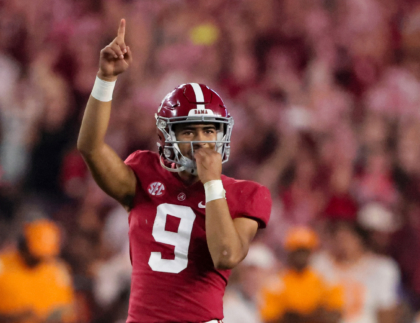 There’s also a possibility Chicago hits the free-agent and trade markets in an aggressive manner. The last-place team boasts a projected $111.6 million in cap room. That money could be used to pick up a certain All-Pro wide receiver in a trade with a conference rival.

As it is, Fields will be the Bears’ starting quarterback in 2023. Poles’ comments on Monday were meant more as a signal to opposing teams in trade talks for the top selection.