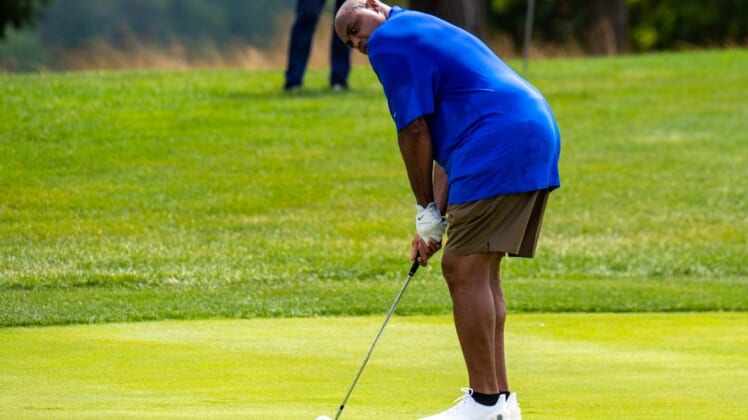 Charles Barkley has no offer in hand from the LIV Golf Series, but that hasn’t stopped corporate partners from letting the Basketball Hall of Famer know where they stand on his potential exit from TNT.

“I can’t keep TNT in limbo. That’s not fair,” Barkley said Thursday before teeing it up at the LIV event at Trump National Golf Club Bedminster. “Not only are they (TNT) concerned, my sponsors are concerned. I’ve heard from Subway, Capital One (and) Dick’s Sporting Goods. At some point I’m going to have to make a decision, plain and simple.”

Barkley said he was open to any discussion with LIV and would meet again with LIV Golf CEO Greg Norman.

“They haven’t offered me a contract. They asked me if I was interested and I said yes,” Barkley said. “I met with Greg and I told him yes. I’m in a win-win situation. If they offer me something good, that’s great. If they don’t, I’ve got a great job at TNT.”

Barkley said he wouldn’t make any decisions without talking to “The Godfather,” Ernie Johnson.

Barkley also shared his unvarnished opinion on backlash against the LIV Golf Series for its Saudi Arabian funding. The LIV receives financial backing from the Public Investment Fund Saudi Arabia.

“Everybody’s making up words, like, sportswashing and dirty money. I’m like, listen, if you play sports, we all take money from some sources you might not love or appreciate,” Barkley said. “I don’t want to be a hypocrite. These (LIV) guys are trying to make a living. I wish them nothing but the best. Same thing with my friends on the PGA Tour. But everybody is just kind of like trying to play the moral card. For some reason, everyone wants to place selective outrage. I’m never going to let that happen on my watch.”

The event in northern New Jersey had numerous detractors beyond PGA competitors and sponsors.

Family members of 9/11 victims were protesting near the entrance and held a news conference this week, with a second planned for Friday.

“This event comes in the wake of members of 9/11 Justice sending former President (Donald) Trump a letter earlier this month expressing the extreme pain, frustration and anger they feel as a result of his decision to host the Saudi-sponsored league at his club in New Jersey in the shadows of Ground Zero,” the organization said in a release.

Trump also played in the event on Thursday and said he supports players joining LIV to get “all the money they can.” He also said many in the Saudi Arabian financial sector, including government officials, remain good friends.