Chargers poised to make playoffs in 2017

Between injuries and heartbreaking losses, the Los Angeles Chargers have been the league’s unluckiest team for a while. Last season, they ranked 29th in adjusted games lost on both sides of the ball, per Football Outsiders’ Almanac, while losing nine one-score games. As if that wasn’t enough, the team left San Diego for Los Angeles during the offseason.

The only silver lining: the Chargers are poised to make the playoffs this year.

Quarterback Philip Rivers is 35 years old but hasn’t slowed down much. Though Rivers led the league with 21 interceptions last season, that was in large part due to terrible luck. Rivers threw 26 interceptable passes in 2016, per Cian Fahey’s charting, putting him squarely in the middle of the road. Unfortunately for him, a huge percentage of those passes were caught. Setting aside interceptions, Rivers had a great 2016. He ranked seventh in accuracy percentage, per Fahey’s charting, and threw for 4,386 yards. That, despite a receiving corps that lost 463 yards, according to Fahey.

Luckily for Rivers, his receivers look much better this year.

The biggest reason for that is Keenan Allen’s return from injury. Though Allen is certainly a risk to get hurt again — he hasn’t played a full year since 2014 — the 25-year old is one of the best receivers in football when healthy. Before he hurt himself in 2015, Allen went for 725 yards in just eight games, catching an absurd 75 percent of passes thrown his way. 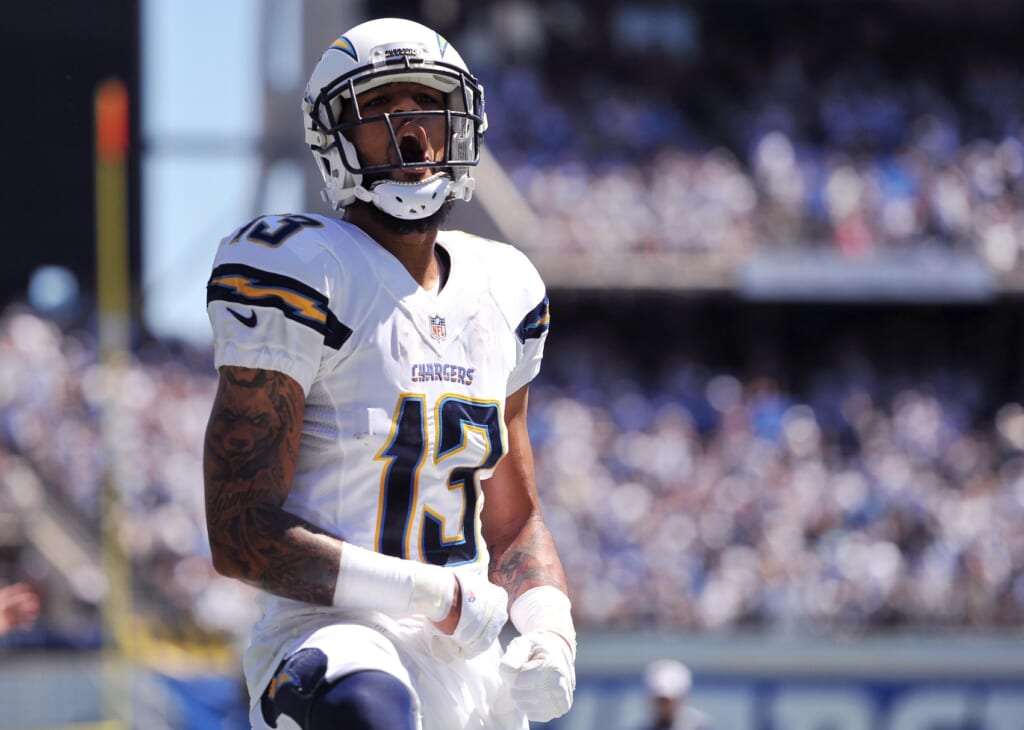 The Chargers also spent their first round pick on a receiver: Clemson’s Mike Williams. Though Williams is already dealing with an injury, the Chargers got good news on Sunday. Williams should return in October after original reports indicated he could miss the entire season. Williams is a big, physical receiver who figures to be a weapon in the red zone. He’s only a so-so route runner, but he makes up for it by catching 50-50 balls and getting yardage after the catch. Once he comes back, the Chargers will have two great receivers at the top of their depth chart.

Travis Benjamin will be Rivers’ second receiver until Williams comes back. Benjamin is coming off a great 2016 in which he finished 19th among receivers in DVOA. He went for 14.4 yards per reception with a 63 percent catch rate last year.

Tight end Hunter Henry looks like a strong heir to Antonio Gates. Though Henry had just 36 receptions in 2016, he finished third among tight ends in DVOA and sixth in DYAR. Gates will still get playing time as well, but Henry should be the primary tight end. During September, the Chargers could go with a lot of ’12’ personnel — one back, two tight ends — to make up for a lack of depth at receiver. That goes double if Tyrell Williams’ groin injury lingers.

The run game struggled in terms of efficiency last season. Though Melvin Gordon went for 997 rushing yards, he averaged just 3.9 per carry and ranked 29th among running backs in both DVOA and DYAR. Gordon is young — this is just his third season — and there’s room to improve. Consistency is the biggest thing for him this year. Gordon’s biggest problem in 2016 was that when he struggled, he struggled badly. There were three separate times in which Gordon had at least 15 carries and averaged less than three yards per carry in a game. If he can cut those out, Gordon could easily start living up to his potential. 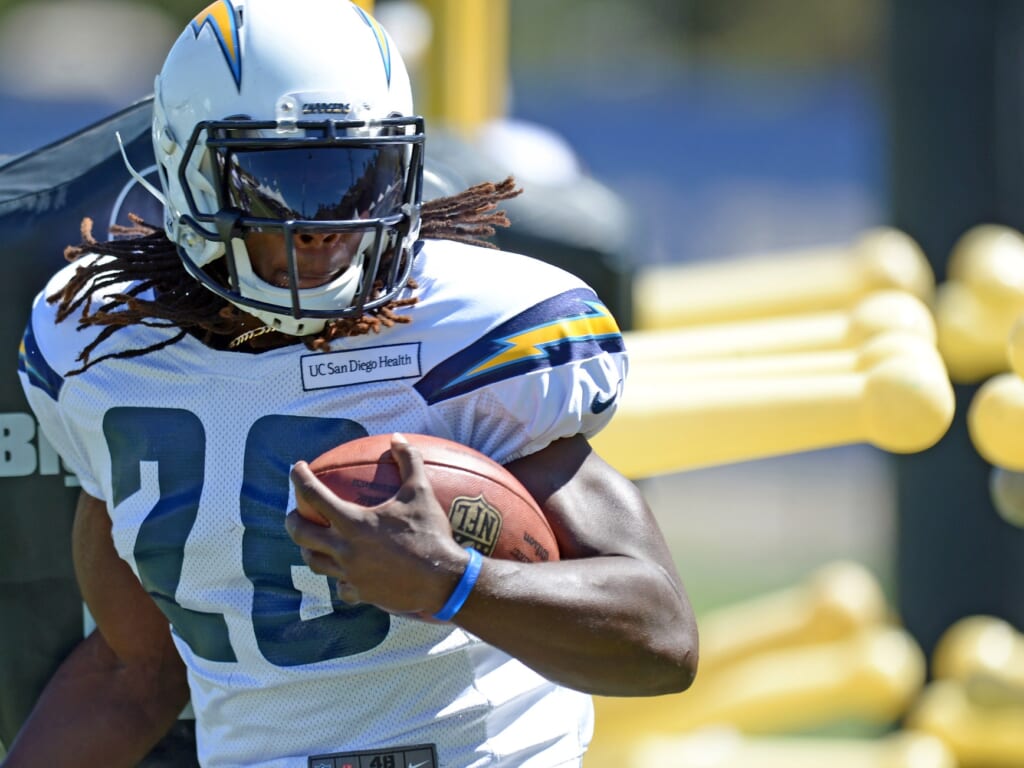 The offensive line was the worst part of the offense in 2016. Los Angeles spent serious draft capital to improve it, taking guards Forrest Lamp and Dan Feeney with their second and third round picks. However, Lamp is out for the season with a torn ACL. Feeney, the right guard, has a ways to go. In college, he had a narrow base, poor balance, and wasn’t mobile. The positives were certainly there: Feeney is athletic with good speed. He’s a good reach blocker who fits well in a zone scheme. At Indiana, Feeney rarely gave up pressure, allowing just one sack, one hit and eight hurries last season, according to PFF.

At left guard opposite Feeney, Matt Slauson is expected to move over from center. Slauson is 31 years old, but had a solid 73.5 PFF grade last season. The byproduct of Slauson moving to guard is Spencer Pulley starting at center. Pulley played just 218 snaps last season, but had a terrible 44.6 PFF grade. Once Max Tuerk returns from a suspension in Week 5, Slauson could move back to center though, with Tuerk playing guard. At left tackle, the Chargers brought in Russell Okung via free agency. Though the veteran is a strong run blocker, Okung had terrible pass blocking numbers last year. He allowed seven sacks and blew 18 pass blocks with the Denver Broncos, per FOA. Joe Barksdale, the right tackle, is pretty average. He finished 20th in snaps per blown block out of 34 right tackles last season, per FOA.

If the offense stays healthy, this could be a top-10 unit. That’s a lot to ask from a team notorious for suffering injuries, but it’s important to keep in mind that it tends to be random from year to year. The Chargers’ talent is up there with any other team, saving perhaps for the offensive line.

Where this team is really underrated, however, is on defense. The Chargers were seventh in defensive DVOA last season. With a full year of Joey Bosa, it could get better. In just 12 games during his rookie season, Bosa was one of the best defensive players in football. He had 10.5 sacks, 11 hits and 26 hurries, per FOA, and finished fifth among edge rushers with an 89.7 PFF grade in 2016. On the opposite edge, Melvin Ingram wasn’t far behind with an 88.2 grade. He posted eight sacks, 12 hits and 42 hurries last year, per FOA. 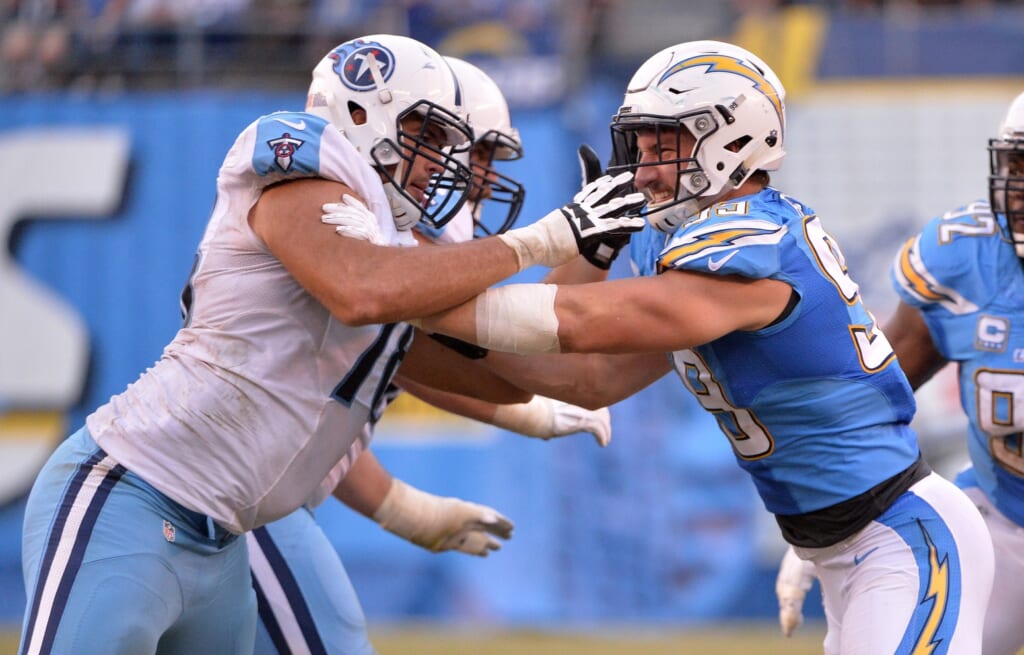 Those two account for most of L.A.’s pass-rushing production. The front three was the biggest reason the team finished sixth in adjusted line yards last season and looks good again this year. Defensive end Corey Liuget finished 10th at his position with a 90 percent run stop rate in 2016, per FOA. Nose tackle Damion Square had an 89 percent run stop rate along with an absurd 0.3 average rushing yards per tackle, according to FOA. Brandon Mebane is aging but ranked 19th among interior defenders with an 83.3 PFF grade last year. Expect Darius Philon and Tenny Palepoi to see rotational snaps at defensive end as well. The two had run stop rates of 90 and 83 percent last year, per FOA. At age 23, Philon could be the Chargers’ future at the position. We could see a lot of him this year.

At inside linebacker, Korey Toomer quietly had an incredible 2016. The 29-year old had a 68 percent success rate in coverage, third at the position, per FOA. He also ranked ninth among inside linebackers with a 73 percent run stop rate. Next to him, Jatavis Brown had a respectable 54 percent success rate and gave up just 6.3 adjusted yards per target, according to FOA. Denzel Perryman is out indefinitely with a leg injury, but is expected to return from IR. Once he does, Perryman should see rotational snaps at the position.

The secondary could be great if it stays healthy. Cornerback Casey Hayward ranked sixth at the position with an 88.4 PFF grade last season. He also ranked 20th among corners with 6.8 adjusted yards per target, according to FOA. Opposite him on the outside, Jason Verrett is coming off an injury that saw him play just four games last season. In 2015, however, he had an 89.4 PFF grade. If they stay healthy, Hayward and Verrett will be a lethal duo in Gus Bradley’s Cover-3 defense. Nickel back could be an issue, as Craig Mager and Trevor Williams both struggled last season. Mager had a 38 percent success rate, per FOA, while Williams put up a 41.7 PFF grade.

Safety Jahleel Addae is coming off a year in which he finished 13th among safeties with an 85.2 PFF grade. He was top-10 among safeties in run stop rate, according to FOA, and gave up 8.1 adjusted yards per target last year. Next to him, the newly acquired Tre Boston led all safeties with a 62 percent success rate last season, per FOA.

It’s hard to feel good about a team that just unceremoniously left its city, especially after it had such an abysmal 2016. But if the Chargers are going to make the playoffs again in the Philip Rivers era, it will be this year.