Arizona Cardinals edge rusher Chandler Jones made it clear to the franchise this offseason that he either wanted a contract extension or a trade. When the organization refused both requests, the All-Pro linebacker agreed to play out the 2021 season in Arizona.

Jones, who missed a majority of the 2020 season with a torn biceps, wanted to prove himself this year. He reported to camp in shape, took part in practices and planned to take advantage of playing on the same defense as J.J. Watt.

Sure enough, the pass-rushing duo is already making an impact. Jones erupted for five sacks in Week 1, including three in the first quarter, helping carry Arizona to an upset over the Tennessee Titans. After proving he could still play at an elite level, many hoped it would kick off contracts talks to keep him with the Cardinals. 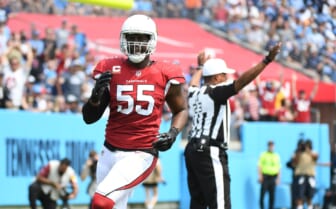 According to CBS Sports’ Jason La Canfora, Jones and the Cardinals are far apart in negotiations and there hasn’t been recent communication between the two sides. Ethan Lock, who represents Jones, shared that Arizona’s last offer was a one-year extension that would be a reduction from his 2021 salary.

The 31-year-old can make a compelling case for an increase in salary on his next deal. Currently, three pass rushers have a base salary of $17-plus million this season and 13 players are bringing in more total cash than Jones.

If the Cardinals were concerned about their 6-foot-5 edge rusher taking a huge step back after a disappointing 2020 season, his performances thus far should erase that doubt. Jones has five sacks, two quarterback hits and a pair of hurries through two games. He also holds a 92.7 PFF pass-rush grade, one of the highest marks in the NFL.

As of now, it seems extremely unlikely that Jones will return to Arizona in 2022. The Cardinals are going to focus their offseason on negotiating a contract extension with Kyler Murray. With so much money invested in him and the staggering deal they agreed to with Watt, the front office is making its priorities clear.

Because of that, Jones will be one of the top free agents available next offseason. As long as he finishes the year healthy, plenty of teams will be more than willing to offer him a lot more than Arizona did. 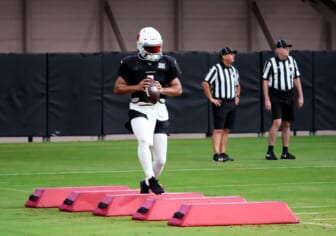