Oklahoma plummeted five spots to No. 13 in the latest College Football Playoff rankings that were released Tuesday following its first loss of the season.

The CFP selection committee already showed its misgivings about the previously unbeaten Sooners due to uneven performances against the likes of Nebraska, West Virginia and Kansas. That was before Baylor defeated Oklahoma 27-14 Saturday in a one-sided game that included the Sooners yanking freshman quarterback Caleb Williams to return to Spencer Rattler for a spell.

The projected four-team field remained unchanged from a week ago, with Georgia, Alabama, Oregon and Ohio State all coming off wins. Nos. 5-7 also stayed the same: Cincinnati, Michigan and Michigan State.

With Oklahoma dropping, Notre Dame, Oklahoma State and Wake Forest filled out the top 10. Wake responded from its first loss of the season by beating North Carolina State 45-42 in a ranked-on-ranked matchup.

Baylor rose two spots to No. 11 after taking down Oklahoma, and Ole Miss moved up by three to No. 12 after defeating Texas A&M 29-19 in one of the marquee games of the week. The Aggies dropped by five to No. 16 as a result.

Houston and Mississippi State entered the rankings at Nos. 24 and 25, while Auburn and Purdue fell out of the Top 25 following losses. Mississippi State came back from down 28-3 to beat Auburn 43-34. It is 9-1 Houston’s first appearance in the rankings all season; the Cougars have won nine straight games after a season-opening loss to Texas Tech.

Below is the complete Top 25: 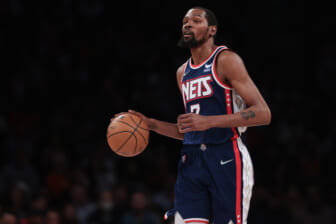