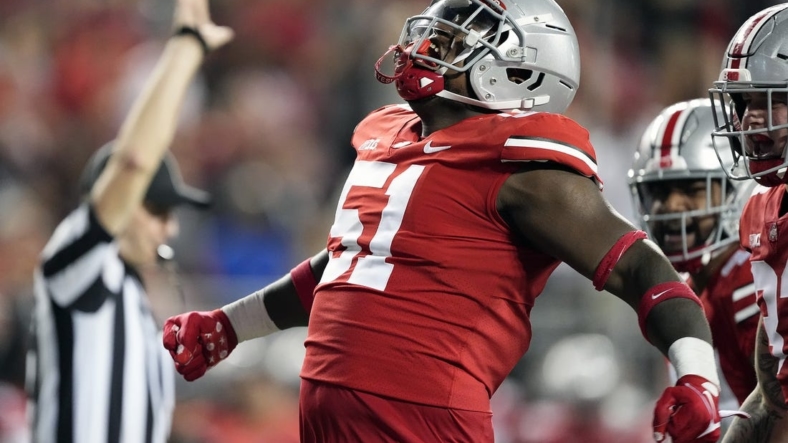 No. 2 Ohio State rallied from a three-point halftime deficit and defeated No. 5 Notre Dame 21-10 in Columbus, Ohio, on Saturday in the season opener for both teams.

C.J. Stroud gave the Buckeyes a 14-10 lead with 17 seconds left in the third quarter when he passed 24 yards to walk-on receiver Xavier Johnson.

Stroud, a Heisman Trophy hopeful, was 24 of 34 for 223 yards and two touchdowns. Williams rushed 14 times for 84 yards while Emeka Egbuka made nine catches for 90 yards and a score.

Reigning Heisman Trophy winner Bryce Young took over where he left off last season, throwing for five touchdowns and rushing for another to lead the Crimson Tide to a dismantling of the Aggies in Tuscaloosa, Ala.

Young, who went 18-for-28 passing for 195 yards, threw two touchdowns to Jermaine Burton, who finished with five receptions for 35 yards in his first game with the Crimson Tide (1-0). Burton transferred from Georgia, where he was a key receiver during the Bulldogs’ run to the national title in January.

Young, who also rushed for a career- and team-high 100 yards and a touchdown on five carries, threw two touchdown passes to Traeshon Holden (five catches, team-high 70 yards) and another to Jase McClellan, who also caught a scoring pass from backup quarterback Jalen Milroe.

Stetson Bennett passed for 368 yards and two touchdowns and also rushed for a score as the Bulldogs opened defense of its national championship by routing the Ducks in the Chick-fil-A Kickoff in Atlanta.

Oregon’s Dan Lanning, making his head-coaching debut after serving as Georgia’s co-defensive coordinator the past three seasons, had no answer for the Bulldogs’ offense, which scored touchdowns on its first seven possessions and amassed 571 yards.

Bennett, the offensive MVP of Georgia’s 33-18 victory against Alabama in last season’s College Football Playoff title game, was 18 of 21 for 254 yards a touchdown in the first half as the Bulldogs built a 28-3 lead.

King completed 20 of 31 passes and tossed a pair of interceptions in his first game since the second contest of last year, when he suffered a season-ending leg injury in the first quarter at Colorado. He also added 35 yards on six rushes before taking a seat for good in the fourth quarter.

The Aggies were never really threatened but didn’t put the Bearkats away until the second half, outlasting a lightning delay of more than two hours that lengthened intermission. But their defense wasn’t affected a bit by the unusual circumstances, limiting Sam Houston State to 198 total yards.

Anthony Richardson made a sensational season-opening statement, propelling the host Gators to an upset win over the Utes in Gainesville, Fla., and delivering Billy Napier a win in his debut as Florida coach.

In his second career start, Richardson showed his poise with a mistake-free performance. His game-winning 1-yard scoring carry with 1:25 left was his third touchdown run of the night. Richardson completed 17 of 24 passes for 168 yards and carried 11 times for 104 yards.

In the final minute, Cameron Rising had Utah on the verge of a win as he drove the Utes to the Gators 6. But Amari Burney made a diving interception in the end zone to seal the win.

Cade McNamara went 9-of-18 passing for 136 yards and a touchdown in roughly one half of work to help lead the Wolverines to a season-opening home win over the Rams.

Dillon Gabriel threw for 233 yards and two touchdowns to help the Sooners notch a victory over the Miners.

Oklahoma, in Brent Venables’ first game as a head coach, got off to a quick start, leading 21-0 in the first quarter. The Sooners overhauled things on both sides of the ball in the offseason after Venables was hired following the departure of Lincoln Riley to Southern California.

Venables brought aboard Jeff Lebby, known for fast-paced offenses at Central Florida and Ole Miss, to run the Sooners’ offense. Oklahoma needed only 13 plays — taking just 3:35 — to rack up 223 yards and build the early lead.

Blake Shapen passed for two touchdowns and ran for a third score, and Gavin Holmes had a 72-yard punt return touchdown as the Bears rolled to a win over the Great Danes in Waco, Texas.

Baylor, the defending Big 12 Conference champions, had little problem with Albany, an FCS school that was picked to finish 12th in the 13-team Colonial Athletic Association after going 2-9 last year.

Shapen completed 17 of 20 passes for 214 yards as Baylor outgained the Great Danes 573-237.Reese Poffenbarger passed for 150 yards and a score and ran for a team-best 45 yards in three quarters of action for Albany.

The Pirates’ hopes of upsetting their local rivals were dashed when kicker Owen Daffer missed what would have been a game-winning field goal from 41 yards out with nine seconds to play in Greenville, N.C.

East Carolina seemed to have swung momentum when it picked off N.C. State quarterback Devin Leary late in the fourth quarter. Four plays later, ECU found the end zone on a 3-yard scamper by Rahjai Harris.

Leary was 17 of 33 through the air for 211 yards. The Wolfpack were marred in this game by an ineffectiveness on third downs — just 4 of 13 on conversions — and penalties, picking up eight flags for 73 yards.

Caleb Williams threw a pair of touchdown passes to Jordan Addison, Austin Jones rushed for a pair of scores and the Trojans rolled past the Owls in Los Angeles.

The highly anticipated debut of the transfer duo did not disappoint from the start. Williams — who followed Trojans coach Lincoln Riley, also making his debut, from Oklahoma — completed 19 of 22 pass attempts for 249 yards.

Other than a fumbled snap and running out of time at the end of the game, Miami scored a touchdown on its other nine possessions, and that excluded a defensive score on Gilbert Frierson’s 32-yard interception return. A deflection by Miami defensive lineman Akheem Mesidor set up that play.

Bethune-Cookman was led by quarterback Jalon Jones, who completed 11 of 20 passes for 243 yards, one touchdown and one interception. The Wildcats scored on the game’s initial possession as Jones completed 4 of 5 passes for 72 yards, leading to Dylan Moghaddam’s 29-yard field goal.

John Torchio scored on a 100-yard interception return and Braelon Allen on a 96-yard run as the Badgers rolled to a nonconference victory over the Redbirds in Madison, Wis.

Torchio turned the game in the first quarter with the longest interception return for a touchdown in Wisconsin history. Allen bounced right off a clogged middle and went 96 yards to put Wisconsin up 14-0. It was the Badgers’ longest touchdown run in school history, breaking the mark of 93 yards by James White in 2013.

Illinois State quarterback Zack Annexstad, a transfer from Minnesota, completed 16 of 24 passes for 186 yards with two interceptions for the FCS Redbirds, who dropped to 1-9 versus Big Ten opponents.

KJ Jefferson threw for 223 yards and was responsible for four total touchdowns as the Razorbacks outlasted the visiting Bearcats in Fayetteville, Ark.

Raheim Sanders racked up 117 rushing yards and tight end Trey Knox caught two touchdowns for the Razorbacks. Jefferson completed 18 of 26 passes and added 62 rushing yards on 18 carries, as Arkansas finished with 224 yards on the ground as a team.

Cincinnati quarterback Ben Bryant went 26-for-43 for 325 yards, two touchdowns and one pick. Corey Kiner ran for 59 yards and a touchdown for the Bearcats, who lost in the regular season for the first time since 2019.

Will Levis threw for 303 yards and three touchdowns and Barion Brown added a 100-yard kickoff return for a score to lift the Wildcats to a victory over the visiting RedHawks in Lexington, Ky.

Levis, who was 21-for-32 passing, found Tayvion Robinson six times for 136 yards, while Dane Key added four receptions for 53 yards and a touchdown and Brown contributed three catches for 45 yards to complement his highlight on special teams.

After his team led 13-10 at the half, Brown caught the second-half kickoff on the goal line and ran upfield before cutting to his left. He raced down the sideline untouched for a 20-10 lead just 13 seconds into the third quarter.

Three Ole Miss players rushed for touchdowns and Zach Evans had 130 yards on the ground as the Rebels defeated the Trojans at Oxford, Miss.

Evans, a transfer from TCU, didn’t find the end zone on any of his 20 carries, but Ulysses Bentley IV, Jonathan Mingo and Quinshon Judkins each had a 2-yard touchdown run and the Rebels defense shut down the Trojans.

Redshirt junior Gunnar Watson, who was named the Trojans’ starter by first-year coach Jon Sumrall earlier this week, completed 34 of 47 for 275 yards with one touchdown and one interception. Ole Miss out-rushed Troy 266-60, though the Trojans possessed the ball for nearly 37 minutes.

Clayton Tune’s two-point conversion was successful thanks to an 8-yard run in the third overtime as the visiting Cougars outlasted the Roadrunners in a wild season-opening game for both teams in San Antonio.

Both teams were forced to settle for field goals in the first overtime. The Cougars then scored on a 1-yard run by quarterback Tune and a pass to Nathan Dell on the mandatory two-point conversion. UTSA countered with 13-yard TD pass from Frank Harris to De’Corian Clark, and Harris rushed for the two-point conversion on its possession in the second OT.

Tune then scored the game-winner from added distance because of a false start, after which Harris’ pass was incomplete on the Roadrunners’ attempt in the third overtime.

Jaren Hall threw for 261 yards and two touchdowns to lead the Cougars to a victory over the Bulls in Tampa, Fla.

Christopher Brooks ran for 135 yards and a touchdown in his debut for BYU. Puka Nacua added 98 yards from scrimmage and two rushing touchdowns for the Cougars before leaving with a sprained ankle late in the first quarter.

BYU (1-0) notched its second-ever win in the state of Florida after totaling 575 yards and averaging 8.3 yards per play. The Cougars previously defeated UCF in the 2020 Boca Raton Bowl.