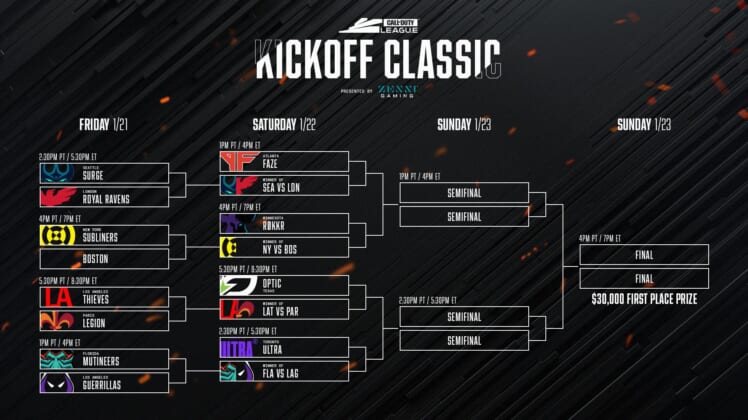 The Call of Duty League announced the matchups for the Kickoff Classic, an unofficial tournament scheduled for Jan. 21-23 that includes a $30,000 prize for the winning team.

The event does not award CDL points but does include all 12 franchises.

The bracket is seeded based on the final standings from the CDL championship last year. That means the Atlanta FaZe, Minnesota RØKKR, OpTic Texas and Toronto Ultra received first-round byes.

Atlanta, Minnesota and Toronto each finished in the top four. The new OpTic Texas franchise technically finished fifth-sixth, but half of the new roster from 2022 is from the fourth-placed Dallas Empire team.

The first-round matches will include the Seattle Surge against the London Royal Ravens. If Seattle can win that match, the Surge will face the FaZe team it scored a massive upset against the last time the two met.

The event will take place at the Esports Stadium in Arlington, Texas.

Which matchup are you looking forward to? ?? pic.twitter.com/W9kjJ5eciY