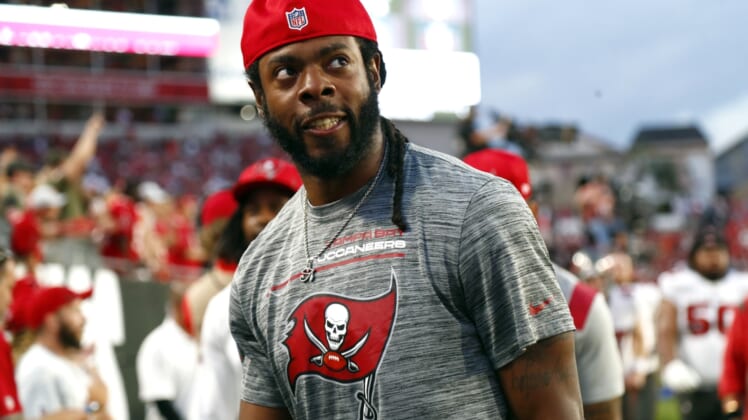 Loquacious cornerback Richard Sherman could be behind a microphone instead of shielding wide receivers for the 2022 NFL season as part of Amazon’s broadcast team.

Sherman, a five-time All-Pro, battled numerous injuries in 2021 with the Tampa Bay Buccaneers and turned 34 in March. He remains hopeful a playing opportunity will present itself, per NFL Network, but is near an agreement to play a role with Amazon if no offers to get back on the field emerge.

A fifth-round pick in the 2011 NFL Draft, Sherman’s brash vocal style drew attention as he was locking down top receivers for nearly a decade as a founding member of the Seattle Seahawks’ vaunted Legion of Boom secondary.

Sherman played for the Seahawks through 2017 before he was released in a salary cap move. Acting as his own agent, he joined the division rival San Francisco 49ers (2018-2020) before linking on with Tampa after the start of the season last year.

In a 2019 interview, Sherman boasted he was offered the booth analyst spot for “Monday Night Football” when Jon Gruden returned to coach the Raiders. ESPN eventually hired Jason Witten. Sherman said ESPN made the offer after he suffered a torn Achilles in 2018.

As part of the exclusive deal to stream “Thursday Night Football” games this season, Amazon hired Al Michaels and Kirk Herbstreit as the lead team in their broadcast booth and signed Hall of Fame tight end Tony Gonzalez to a contract for a studio role.

Prime Video was informed during the NFL draft last month its first game of the 2022 season is the Thursday, Sept. 15 matchup between the Kansas City Chiefs and Los Angeles Chargers. The full 2022 NFL schedule will be released Thursday night.