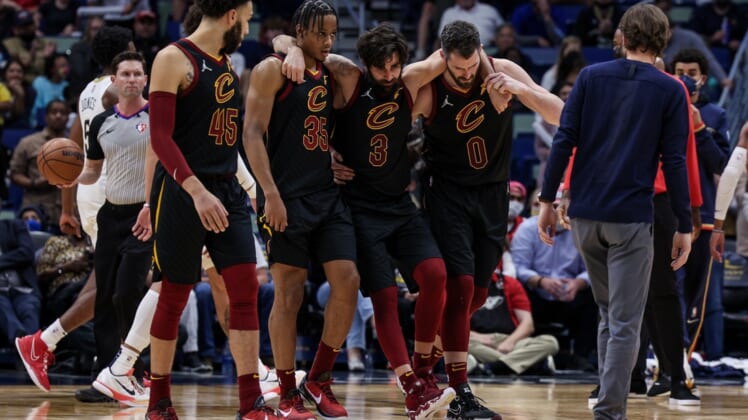 Cleveland guard Ricky Rubio was being evaluated for a left knee injury after the Cavaliers’ 108-104 loss at New Orleans on Tuesday.

Rubio, who is in his first season with the Cavaliers and his 11th year in the NBA, was one assist away from a triple-double when he slipped and fell while making a drive for a layup with just under three minutes left.

In obvious pain, Rubio grabbed the knee and motioned to the bench for help. He did not put any weight on his left leg as he was helped to the locker room.

After the game, coach J.B. Bickerstaff said there was no immediate indication of the severity of the injury.

ESPN reported that Rubio would undergo an MRI on Wednesday. The team stated that it would update Rubio’s condition on Wednesday.

Cleveland Cavaliers guard Ricky Rubio will get an MRI on his left knee Wednesday, source tells ESPN. There’s obvious concern on the possible severity of the injury. Rubio has been a huge part of Cavs’ success story this season.

Rubio is in the final year of a three-year, $51 million contract he signed with the Phoenix Suns, his third team. While in his second stint with the team that drafted him, the Minnesota Timberwolves, he was traded to the Cavaliers in August for Taurean Prince and a second-round pick in the 2022 draft.

After finishing with 27 points, 13 rebounds and nine assists against the Pelicans, Rubio is averaging 13.1 points and 6.6 assists this season while shooting 36.3 percent from the field and 33.9 percent from 3-point range. He owns career averages of 11.1 points and 7.6 assists in 664 games (600 starts).