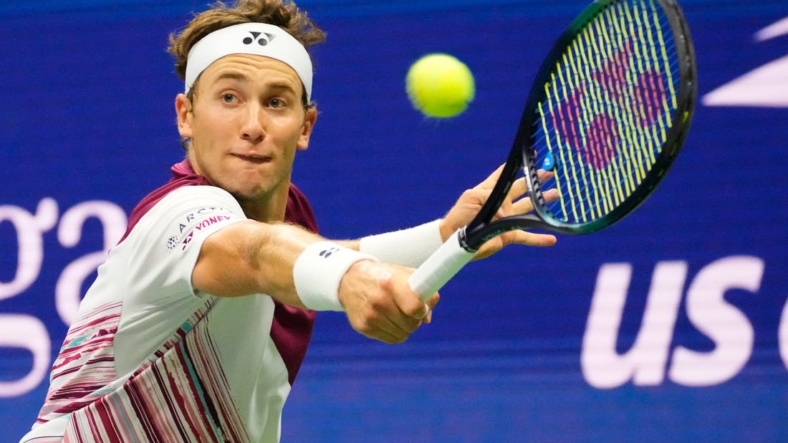 Fifth-seeded Casper Ruud advanced to the U.S. Open semifinals for the first time in his career by sailing to a 6-1, 6-4, 7-6 (4) victory over 13th-seeded Matteo Berrettini on Tuesday afternoon in New York.

Ruud saved seven of nine break points and kept Berrettini off-balance throughout the match while becoming the first player from Norway to advance this deep at the U.S. Open.

It is the second time the Norwegian has reached a Grand Slam semifinal. He was a French Open finalist three months ago before losing to Rafael Nadal.

Ruud will face either No. 23 seed Nick Kyrgios of Australia or 27th-seeded Russian Karen Khachanov in the semis. Those two players meet Tuesday night.

Ruud won 11 of the first 13 games against Berrettini in a rapid-fire start that set the tone for his dominance.

“That was the best start I’ve ever had before in a match,” Ruud said in an oncourt interview. “Everything was going my way. I was hitting all the spots I needed to. But Matteo might not have served as well as he usually does. I was able to take care of the chances I got.”

Berrettini had a 13-0 edge in aces but the Italian converted just 64.4 percent of his first-serve points. Ruud converted 74.6 percent and had 20 winners against 23 unforced errors.

Berrettini had seven of his aces in the final set as well as 21 of his 35 winners as he attempted a comeback. Overall, Berrettini made 39 errors.

The victory also keeps Ruud in the mix to become the World No. 1. He must reach the final to have a chance, the same situation third-seeded Carlos Alcaraz of Spain faces.

“That’s something that’s also on the line,” Ruud said. “I don’t want to think too much about it. Of course, it’s something that all young players dream about. So if I’m in a position to do it, let’s see if I can accomplish it. Honestly, I had no idea I had the chance to become World No. 1 when we started this tournament.”