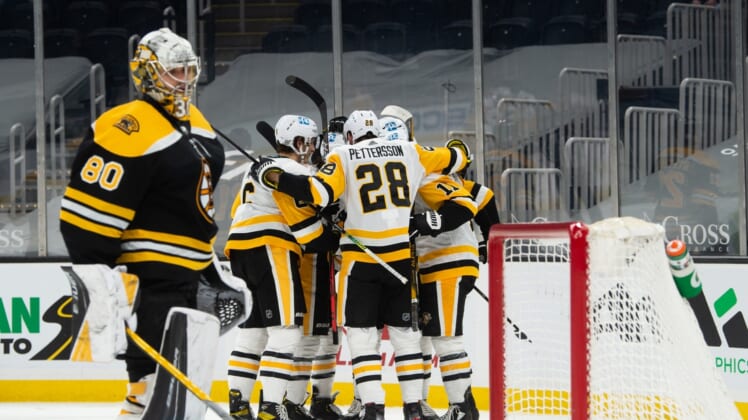 The visiting Pittsburgh Penguins never trailed and got 30 saves from goaltender Casey DeSmith on Thursday to win their fifth straight game, 4-1 over the Boston Bruins.

Jason Zucker, Zach Aston-Reese, Mike Matheson and Jake Guentzel scored for Pittsburgh, which was 0-8-2 in its previous 10 games in Boston.

DeSmith, starting with Tristan Jarry injured, improved to 9-3-0 and allowed two or fewer goals for the seventh straight start.

Boston lost defenseman Brandon Carlo in the first period to what the team called an upper-body injury.

The Penguins dominated the first period, including a 7-2 shots advantage. Their best scoring chance came when Zucker had a breakaway but missed with a backhander.

That momentum carried over to the second, and Aston-Reese gave Pittsburgh a 1-0 lead at 2:01. Brandon Tanev, in his return after missing six games because of injury, forced Boston’s Craig Smith to turn the puck over in the Bruins’ end and carried the puck down the right side. From the far edge of the circle, he sent a backhand pass across to Aston-Reese, who put it inside the far post.

It was Matheson’s turn to make a strong play as the Penguins took a 2-0 lead at 13:12 of the second.

He carried the puck from his own end down the right boards and cut through the circle, speeding inside the coverage of Bruins defenseman Jeremy Lauzon, who had his stick knocked away by Matheson. Matheson went from backhand to forehand and, with defenseman Charlie McAvoy closing in, flicked the puck past Vladar’s right skate.

Marchand cut it to 2-1 at 11:14 of the third. Patrice Bergeron toted the puck down the right side and deep before setting up Marchand on a backdoor pass. Marchand roofed the puck to tie for the team lead with his 14th goal.

Pittsburgh pushed it to 3-1 1:53 later. Evan Rodrigues, on a two-on-one with Zucker, drew Vladar toward him, then fed Zucker, who had a gaping net behind the goalie.

Guentzel picked up his 15th goal with an empty-netter with 2:09 left.