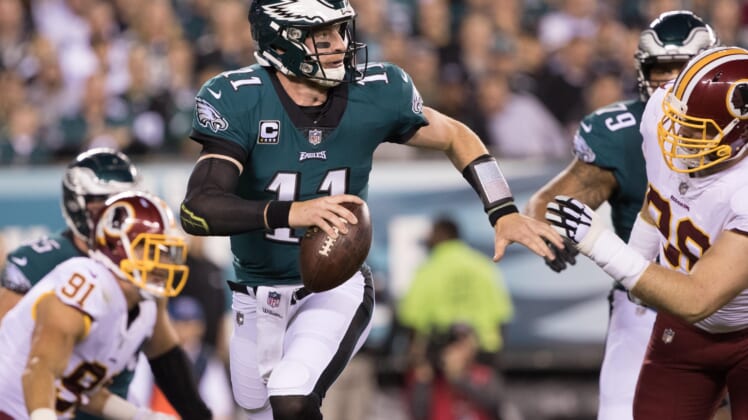 The reeling Philadelphia Eagles are still in the playoff hunt, but they’ll be without starting quarterback Carson Wentz in Week 15 and maybe more.

NFL Media’s Ian Rapoport reports Wentz will likely sit out Philly’s clash with the Los Angeles Rams on Sunday but isn’t guaranteed to return this season.

#Eagles QB Carson Wentz, dealing with a back issue, is not expected to play this week, sources say. Depending on the result, given the time of year, Wentz may not play again in 2018. The team is still gathering info on his health.

Fortunately for the Eagles, they have a capable backup in Nick Foles. Last season’s Super Bowl MVP started two games earlier this year, too.

Philadelphia will travel to Los Angeles, which boasts an 11-2 record but is coming off an ugly loss against the Chicago Bears. The Rams have clinched the NFC West but are eyeing home-field advantage in the playoffs.

If the Eagles lose to Sean McVay’s club, they could fall perilously behind in the wild-card race. At that point, risking Wentz’s health might not be worth it. Or, he simply might not be physically prepared anyway.

Either way, this is another unfortunate moment in a disappointing season for the reigning Super Bowl champions.