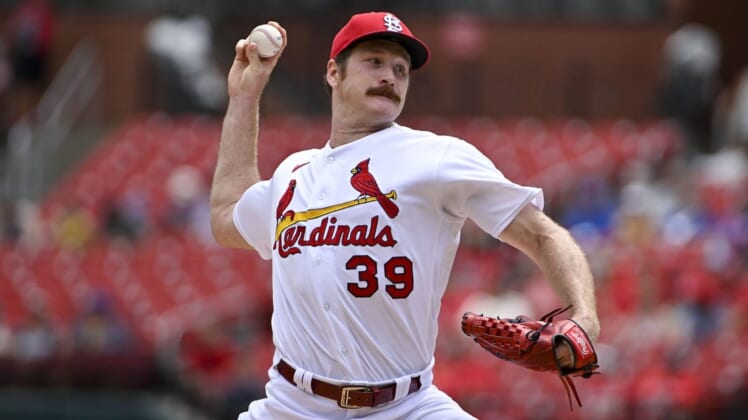 Miles Mikolas will try to regain his form for the St. Louis Cardinals when they host the Milwaukee Brewers in the rubber game of their three-game series on Sunday.

The Cardinals won 3-1 on Friday, and the Brewers responded with a 3-2 victory in 10 innings Saturday.

On the 14 hits, 11 were singles — including four infield singles.

“Sometimes it’s death by a thousand paper cuts,” Mikolas told the St. Louis Post-Dispatch. “You come into the game and I’m saying, ‘Hey, I’m going to keep the ball down and make them hit singles and earn it.’ And they hit 11 singles and maybe that was the wrong strategy. Maybe I should have let them pop it up or something. Whatever I did wasn’t the best thing to do.”

Mikolas said he won’t overreact to the blowout loss.

“I think the key to having a lot of innings is staying with your approach,” he said. “What got me to 140 innings at this point is what’s going to get me hopefully 200-and-something innings by the end of the season and into October. That’s what made me successful.

“I’m not going to go back to the drawing board and say, ‘Wow, I need to strike everybody out because I cannot keep giving up infield singles.’ That’s not who I am. I’m not going to reinvent myself. That’s how you lose track of things and fall off the horse.”

Mikolas is 1-2 with a 4.34 ERA in three starts against the Brewers this season. He is 6-4 with a 4.04 ERA in 12 career outings against them, including 11 starts.
These teams have split 14 games this season, and the Cardinals lead the Brewers by a half-game in the National League Central.

“I think we match up well against them,” Cardinals manager Oliver Marmol said. “It’s been a good back and forth, for sure.”

The Brewers will counter Mikolas with left-hander Aaron Ashby (2-10, 4.32 ERA), who faced the Cardinals on April 17. Ashby walked four and gave up two hits in four innings. He allowed three unearned runs on Albert Pujols’ three-run homer in a game the Brewers won 6-5.

The Brewers have adjusted their bullpen during this series. They put Trevor Gott on the 15-day injured list with a forearm strain and promoted Peter Strzelecki from Triple-A Nashville before Saturday’s game.

“(Gott’s) kind of been battling, just not bouncing back about the last week or so, and just came in yesterday and hadn’t recovered really from his outing Wednesday in Milwaukee, and today as well, just didn’t feel any better,” Brewers manager Craig Counsell said. “So, at this point, just don’t anticipate him to be available the next couple of days, and so we made a decision to put him on the injured list.”