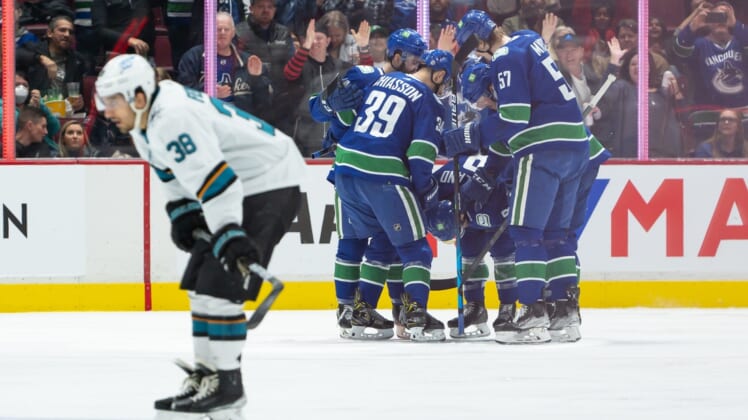 Alex Chiasson scored the tiebreaking goal early in the third period and the host Vancouver Canucks won their third game in a row, beating the struggling San Jose Sharks 4-2 on Saturday night.

Chiasson, who scored twice in Vancouver’s 5-1 road victory over the Arizona Coyotes on Thursday, went short side to beat San Jose netminder Kaapo Kahkonen (35 saves) and put the home team ahead 3-2 at 2:07 of the third period.

Jason Dickinson and Conor Garland also scored, Luke Schenn added a late empty-netter and Thatcher Demko made 35 saves for the Canucks (35-28-10, 80 points) snapped an 0-3-2 home skid. Chiasson had a two-point game for Vancouver, which moved within four points of the final Western Conference wild-card spot.

Tomas Hertl and Nick Bonino each had a goal for San Jose (29-33-9, 67 points), which is mired in an 0-5-1 slide. The Canucks finished sweep of the a three-game season series against the Sharks.

Vancouver wasted no time opening the scoring just 2:03 into the contest. Following a San Jose turnover, when Sharks defenseman Ryan Merkley was leveled hard to the head, Dickinson got the puck, broke in, then put a nifty move on Kahkonen for his fourth goal of the season.

Though the Sharks looked discombobulated through the early portion of the game, they managed to tie it through a five-on-three situation at the 7:33 mark of the first. Positioned perfectly in front of the net, Hertl flipped home a rebound of Timo Meier’s one-timer.

Vancouver regained the lead 4:49 into the second period when Garland kept the puck via a two-on-one for his 15th goal of the season.

The Sharks answered again when Bonino, playing the 750th game of his career, redirected Brent Burns’ shot past Demko to make it 2-2 with 1:23 left in the middle frame.