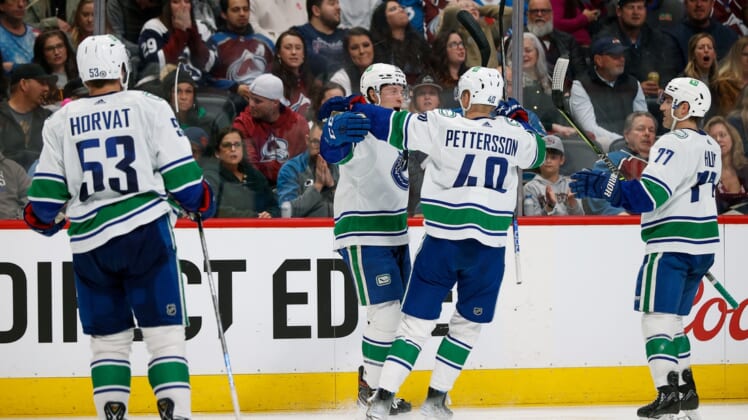 The Vancouver Canucks will continue their push for a Western Conference playoff spot when they visit the slumping St. Louis Blues on Monday.

The Canucks have gone 2-0-1 on their current four-game road trip, which concludes against the Blues.

Meanwhile, the Blues have gone 1-3-2 in their last six games, and 3-6-3 since the beginning of March, to slide into third place in the Central Division, one point ahead of the Nashville Predators in advance of play Sunday.

Vancouver’s 4-1 victory at Dallas on Saturday lifted its point total to 73 and kept the team within three points of the Vegas Golden Knights for the final Western Conference wild-card playoff berth. The Canucks also moved within four points of the Edmonton Oilers for third place in the Pacific Division and within five points of the Predators for the first wild-card slot.

“You’ve got to bring confidence every night,” Canucks goalie Thatcher Demko said. “(Opponents) are too good. They’re going to expose you. You try to go into every game with the same mindset. The outcome is not really in your control. You can just focus on each individual moment, each shot, each chance against, and go from there.”

Elias Pettersson scored twice for the Canucks against the Stars, giving him three goals and six assists in his last nine games. Vancouver’s top line of Pettersson, captain Bo Horvat and Brock Boeser has led the recent charge.

“I think I told him, especially, to shoot the puck,” Boudreau said. “He’s got such a great shot … and he doesn’t use it. He wants to be a playmaker most of the time, and when he shoots the puck, they go in.”

The Blues are coming off a 7-2 loss at home to the Carolina Hurricanes. Blues coach Craig Berube did see some positive signs in the humbling defeat.

“Third period, I thought we were the better team,” Berube said. “We pulled the goalie early and they scored two empty-net goals and that was the end of it. But the way we played the third is the way we have to play hockey, in my opinion. We were way more aggressive, on our toes, heavier to play against, heavier sticks, direct, north. Just had the will.

“I didn’t think our start was that bad to be honest with you, but we did fall behind. First period was OK. Second period, we get scored on there pretty quick. I thought that had a real impact on our team that period.”

The Blues have been struggling to regain the defensive form that helped them win the Stanley Cup in 2019.

What has been missing?

“Just the buy-in to playoff style of hockey,” Blues forward Brayden Schenn said. “Wins are tough now. You’ve got to be able to grind this time of year, and we’re just not doing enough of it.”