Canelo Alvarez moves up a class to take on Dmitry Bivol 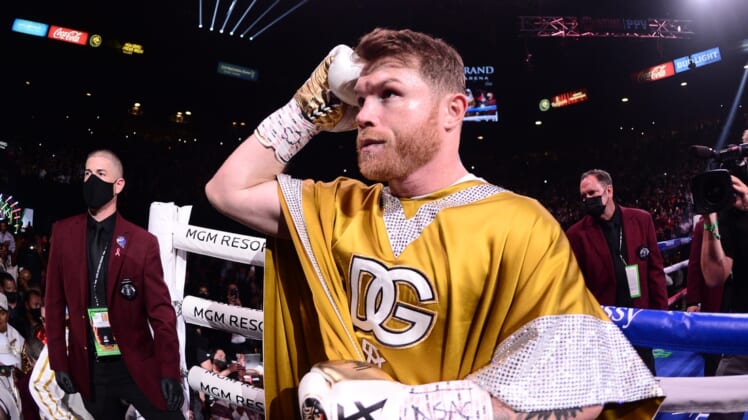 His success in the ring also earned Alvarez the freedom from being tied to specific promoters or viewing platforms for long periods. Moreover, Alvarez can navigate weight classes to his preference, as he did last year when he became the first undisputed super-middleweight champion in the sport’s history.

With the super-middleweight landscape under his domain, Alvarez now seeks similar acclaim at the 175-pound light-heavyweight class.

On Saturday night, the native of Mexico will challenge WBA light-heavyweight champion Dmitry Bivol at T-Mobile Arena in Paradise, Nev. The bout is the first of Alvarez’s two-fight deal with promotional company Matchroom Boxing and streaming service DAZN.

“I beat all the champions in 168, so for now, I’m ok in that weight,” Alvarez said in a news conference Wednesday that also featured Bivol. “But I need to take other challenges for myself. I need to feel that kind of challenge. To go up to 175 and win another title is amazing for me.”

Alvarez (57-1-2, 39 KOs) is no stranger to light-heavyweight. In 2019, he challenged Sergey Kovalev and scored an 11th-round knockout victory. But Alvarez immediately vacated the title to embark on his successful super-middleweight consolidation.

“I feel alive when I have this kind of challenge,” Alvarez said. “I respect the boxing skills of Dmitry Bivol but this is my time. I’m in my prime and I enjoy this kind of moment.”

However, this new light-heavyweight venture should be different. Although still a champion when he fought Alvarez, Kovalev had suffered knockout losses to Andre Ward and Eleider Alvarez. Bivol, of Russia, remains at a career peak.

Since his title-winning performance against Trent Broadhurst in 2017, Bivol (19-0, 11 KOs) has made seven successful defenses. He fully understands the career and financial windfall linked to fighting someone like Alvarez.

“I asked my team many, many years I want to fight the best guys from light-heavyweight to super-middleweight,” Bivol said. “I’m glad I got this fight. I hope we can make a great fight for boxing fans.”

Lauded for his boxing skills, Bivol is confident of interrupting the trajectory Alvarez has enjoyed the past eight years.

“Of course, I want to keep my belt and want to win,” Bivol said. “And of course, I respect him. He’s a great champion. I had a long trip to this moment. Now I have to do my job. If you don’t believe in what you do, you never win. I believe in my victory. Why not?”