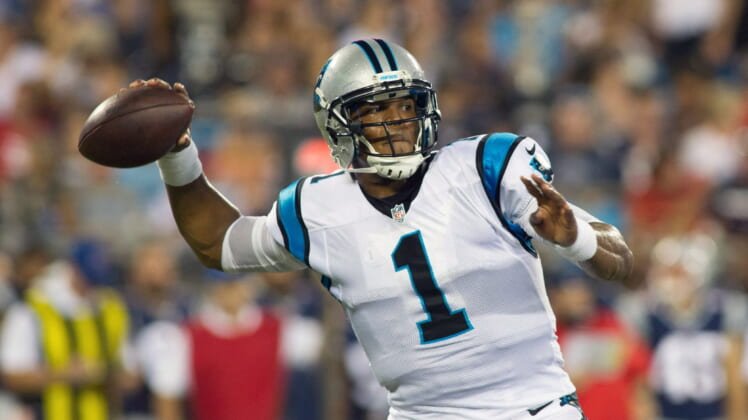 Carolina Panthers quarterback Cam Newton had a bit of a setback with his surgically repaired throwing shoulder a couple weeks back. As a result, the former NFL MVP was unable to throw the ball for a large portion of training camp.

But on Sunday, Newton finally got back into the groove, albeit ever so slightly, with some passes during practice. As noted by ESPN’s David Newton, Cam Newton “completed 3-of-4 pass attempts, all short throws. He did not throw any long passes.”

After Newton’s initial setback, you have to believe the Panthers are going to be extremely careful easing him back into action. The franchise hopes that he’ll be ready to play in Week 1.

“There’s no reason to (panic). We’re just listening to what the doctors and trainers say. They’re optimistic, as long as we don’t have a setback, which we don’t anticipate,” Rivera said after Sunday’s final practice in Spartanburg, per Joseph Person of the Charlotte Observer. “We’re feeling good about where we are right now. It’s very positive.”

One of the most dangerous quarterbacks in the NFL due to his dual-threat ability to run and throw for scores, Newton is Carolina’s ticket back to the playoffs. This season is a pivotal one after a 2016 campaign that saw them win just six games following the loss in Super Bowl 50.

Recently, Newton pushed back with some public statements in response to the team’s expressed desire to see him run less and throw quicker. Perhaps in light of this latest issue with his shoulder the former Heisman winner will be willing to scale back his running game in favor of staying healthy for the entire season.