Patriots quarterback Cam Newton said coach Bill Belichick has yet to name his starter for New England’s regular-season opener against the Miami Dolphins on Sept. 12.

Newton is competing with rookie first-round pick Mac Jones for the starting job.

Newton completed 4 of 7 passes for 49 yards while Jones connected on 13 of 19 pass attempts for 87 yards in New England’s 22-13 win over Washington in the Patriots’ preseason opener on Thursday.

Neither quarterback threw a touchdown or an interception, and Newton said Belichick has not indicated who he plans to start against Miami.

“You know, he hasn’t said that. So for you to just ask that question, you know, it is what it is,” Newton said Monday following the Patriots’ practice with the Philadelphia Eagles at the NovaCare Complex. “Every single day, I’m coming out here with the anticipation to just get better, and that’s the only thing that I can do. So, I can control that.” 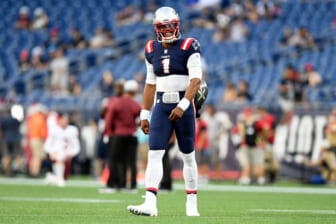 Despite having yet to name their starting quarterback for the game, the Patriots are 3.0-point favorites by DraftKings and 2.5-point favorites by PointsBet at home to open the season. DraftKings was offering Newton as the prohibitive -305 favorite last month to start Week 1, but those odds were off the board on Monday night.

Jones was the 15th overall pick out of Alabama in April. He played one series behind the Patriots’ starting offensive line on Thursday and led New England to a pair of field goals during his five total series.

Newton has been taking the first-team reps during training camp.

“As far as Week 1, we have so much to worry about prior to Week 1. That’s where my focus is right now.”