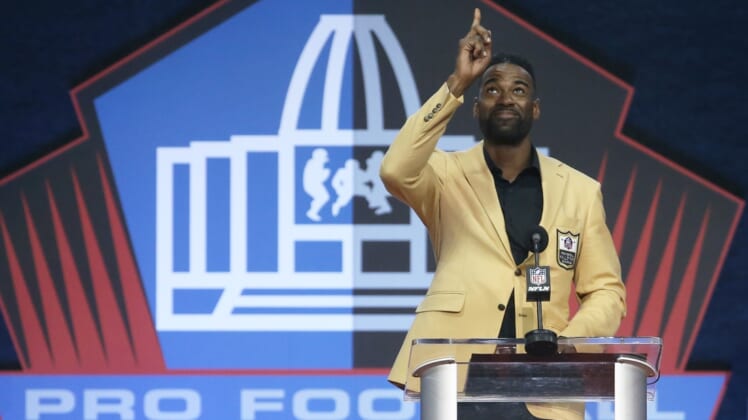 Newly minted Hall of Famer Calvin Johnson said Wednesday that the Detroit Lions’ recent efforts to repair their fractured relationship stemming from a financial dispute are “a joke.”

Johnson and the Lions have been involved in a disagreement stemming from Johnson having to repay $1.6 million to the Lions after he called it a nine-year career after the 2015 season. That was part of the $16 million signing bonus that came with the seven-year, $113.45 million contract extension he signed in March 2012.

Johnson didn’t mention the Lions, the only team he played for, during his Hall of Fame induction speech last month.

“I’m not saying they got to repay me the $1.6 all up front, but they need to figure out a way to do it, and not have me work for it, because I already did the work for it,” Johnson, nicknamed Megatron during his career, told Bensinger.

The Detroit Free Press reported last month that the Lions offered Johnson a three-year deal worth $500,000 annually — with another $100K to Johnson’s favorite charity — to work 28 hours per year in appearances on behalf of the club.

“That’s a joke,” Johnson told Bensinger. “Imagine you had a friend … they gave you something and then they take it back. … Are y’all still cool? And imagine you did a whole bunch of work for it, too. It’s the principle. You cannot have me back unless you put that money back in my pocket. … I’m not working for it.”

Given that it was bonus money, Johnson hadn’t yet earned it by retiring early. But he cited other players in similar situations who retired but weren’t asked to pay back their bonus.

The Lions drafted Johnson No. 2 overall in 2007 after his standout career at Georgia Tech. Johnson is the Lions’ all-time leader in receptions (731), receiving yards (11,619) and receiving touchdowns (83).

Johnson earned $112.2 million overall in salary and bonuses alone during his career, according to Spotrac.