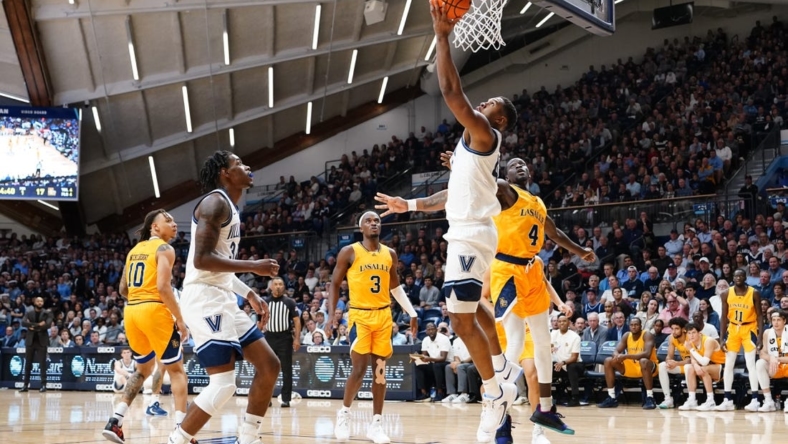 Caleb Daniels hit six 3-pointers with 24 points and 10 rebounds, Eric Dixon added 20 points and three blocked shots and No. 16 Villanova defeated visiting La Salle 81-68 on Monday in the season opener for both teams.

It was the debut for Villanova head coach Kyle Neptune, who took over for Hall of Famer Jay Wright, who retired after guiding the Wildcats to two national championships in a highly-successful 21-year stint.

Jordan Longino and Brandon Slater had 12 each for Villanova against the Big 5 rival. The Wildcats won handily despite playing without Justin Moore (Achilles) and Cam Whitmore (thumb).

Josh Nickelberry led the Explorers with 22 points, while Hassan Drame added 17 and Khalil Brantley had 11.

It was the La Salle coaching debut for the 74-year-old Fran Dunphy, who previously led Pennsylvania and Temple to a combined 17 NCAA Tournaments.

The Wildcats jumped out to a 28-11 lead with eight minutes remaining in the first half after Daniels made his fourth 3-pointer. Anwar Gill then hit two free throws, Nickelberry added a jumper and La Salle cut the deficit to 28-15.

But Villanova’s Mark Armstrong came back with a 3-pointer and Dixon hit consecutive baskets in the post as the Wildcats led 35-17 with 4:36 remaining in the half. Neither team scored in the final 2:59 as Villanova led 37-23 at halftime.

Daniels hit his fifth consecutive 3-pointer and the Wildcats went ahead 43-27 just 1:45 into the second half.

Nickelberry responded with a 3-pointer and a three-point play to close La Salle within 43-33.
The Explorers went 7 of 8 from the field to open the second half but still trailed 57-42.

The Wildcats’ Chris Arcidiacono then made a 3-pointer, Slater drove to the basket and scored and the lead ballooned to 20 for Villanova.

When Gill knocked down a tough shot in the lane with 7:59 to go, La Salle cut the deficit to 65-52. Slater and Daniels scored on consecutive possessions to put the Wildcats ahead by 17.