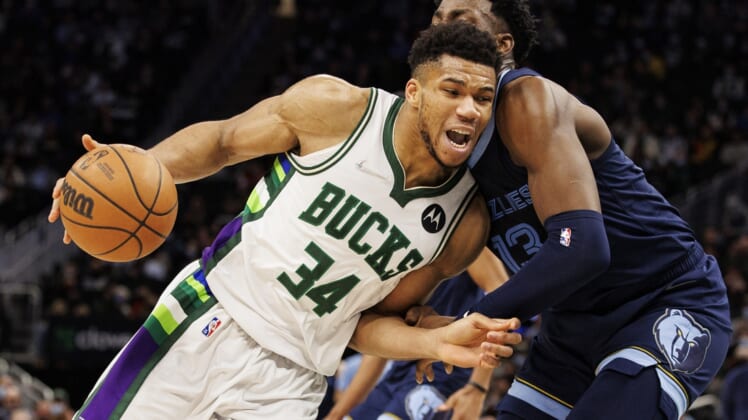 The Memphis Grizzlies will look to continue their dominance at home Saturday night when they host the Milwaukee Bucks.

Memphis hasn’t lost at home since Feb. 16 and is riding a six-game home winning streak after its 133-103 rout of the Indiana Pacers on Thursday night.

With Ja Morant and Dillon Brooks sidelined, Bane stepped up and took over the offense.

“Just being aggressive with those two guys out. Continue to try and make plays for others and for myself,” Bane said. “Just be in that aggressive mindset from the tip.”

Bane is amid an impressive 10-game stretch in which he has scored at least 20 points eight times. He is averaging 22.0 points, 4.9 rebounds and 4.0 assists during that stretch.

Morant has missed four of the past five games and will be out on Saturday as he awaits a re-evaluation of his right knee. Brooks is expected to be back against the Bucks after sitting Thursday due to injury management.

Brandon Clarke is also listed as day-to-day after missing the game against Indiana with a hip injury. Clarke has been a valuable bench piece for Memphis, averaging 10.3 points and 5.5 rebounds.

Milwaukee led by as much as 26 before Washington erupted for 36 points in the fourth quarter. The Wizards closed within seven, but the Bucks held on to earn their second win in the three-game season series.

Grayson Allen was also impressive, scoring 21 points on 7-of-10 shooting, and Pat Connaughton chipped in 16 off the bench. Bobby Portis had 11 points and 12 rebounds for his 24th double-double of the season.

Much like Bane has done for Memphis, Allen has stepped up with others injured and has scored in double figures in each of the Bucks’ last three games. He has been impressive from beyond the arc, making 8 of 13 (61.5 percent) from deep during that span.

“He’s a playmaker. He’s more than a shooter,” Holiday said of Allen. “He’s been able to handle the ball and make plays for other people but has a nice touch around the rim and getting to the basket.”

Antetokounmpo and Middleton could make their returns against the Grizzlies, but both are questionable and are listed as day-to-day.

Saturday marks the second and final meeting between Memphis and the Bucks this season. Milwaukee won 126-114 back on Jan. 19 behind 33 points from Antetokounmpo and 27 from Middleton.