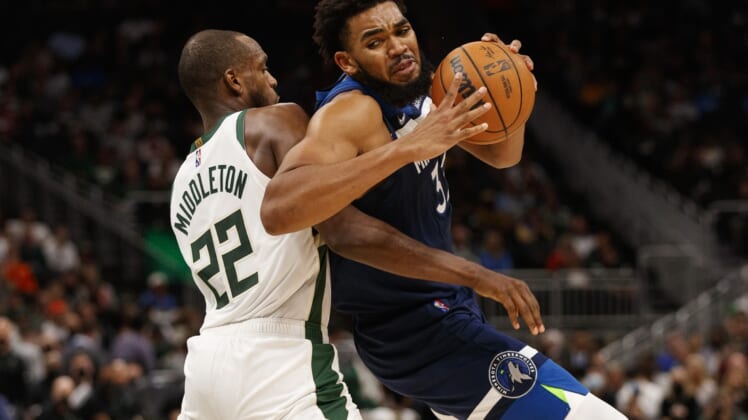 The Milwaukee Bucks look to continue their winning ways as they travel to Minneapolis on Saturday night for a meeting with the Minnesota Timberwolves to cap off a four-game road trip.

Milwaukee has been red hot in March, winning seven of eight games to open the month. The Bucks are averaging 124.6 points during that span and were held under 110 points just once in their sole loss to Golden State on March 12.

In its most recent matchup, Milwaukee took down the Kings 135-126 on Wednesday night. Shots from behind the arc were falling all night, as the Bucks shot 51.4 percent (18 of 35) from 3-point range.

Giannis Antetokounmpo led all scorers with 36 points on 12-of-23 shooting and grabbed 10 rebounds. Khris Middleton trailed close behind with 32 points, eight rebounds and eight assists, and Jrue Holiday chipped in 21 points.

Brook Lopez made his long-awaited return on Monday after recovering from back surgery, but is currently on a minutes restriction.

Despite getting Lopez back, the Bucks will still be without Pat Connaughton due to a hand injury, but coach Mike Budenholzer said he is progressing toward a return. Milwaukee also recently lost DeAndre’ Bembry for the season after suffering a torn ACL and MCL in his right knee.

The Timberwolves are on an equally impressive stretch, winning nine of their last 10 games. They are also riding a three-game win streak after earning a 124-104 win over the Los Angeles Lakers on Wednesday night.

“Things were coming easy for us when we did the right things, moved the ball,” Minnesota coach Chris Finch said. “Twenty-two assists on 124 points is not enough for our team, the way we like to play, but we shot the ball well.”

Karl-Anthony Towns finished with a game-high 30 points and eight rebounds on 8-of-15 shooting. Anthony Edwards supplied 27 points, and Patrick Beverley had 18.

Towns has been dominant over his last nine games, averaging 29.0 points and 11.6 rebounds. He has also recorded six double-doubles during that span and scored a career-best 60 points against San Antonio earlier this week.

Jaden McDaniels will be out with a high ankle sprain, and Naz Reid could miss the meeting with the Bucks due to back spasms.

Saturday marks the second and final meeting between Milwaukee and the Timberwolves this season. Minnesota beat the Bucks 113-108 back on Oct. 27 behind 29 points from D’Angelo Russell, 25 from Edwards and 25 from Towns. Antetokounmpo recorded 40 points and 16 rebounds for the Bucks.