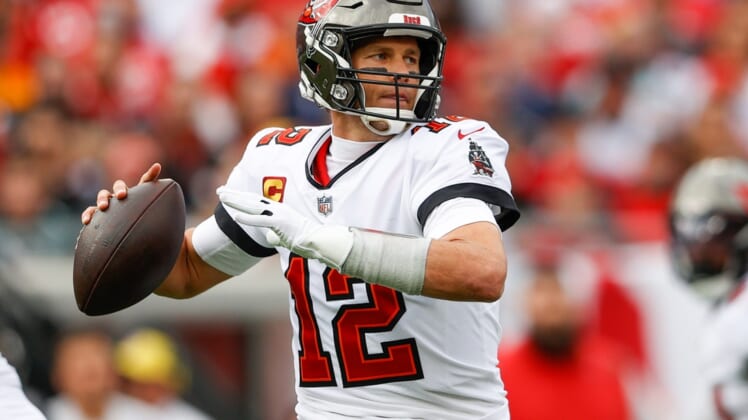 Tom Brady threw for two touchdowns as the second-seeded Tampa Bay Buccaneers opened defense of their Super Bowl crown Sunday with a smooth 31-15 victory over the seventh-seeded Philadelphia Eagles in an NFC wild-card playoff game in Tampa, Fla.

Brady completed 29 of 37 passes for 271 yards in an efficient performance, enabling Tampa Bay to stay home next weekend for a conference semifinal. Mike Evans caught nine passes for 117 yards and a score.

Philadelphia’s Jalen Hurts struggled for most of his first playoff start, connecting on 23 of 43 passes for 258 yards with a touchdown and two interceptions. The Eagles weren’t able to run the ball successfully until the game was out of reach, enabling the Buccaneers to tee off on Hurts.

While Tampa Bay sacked the mobile Hurts just twice, it mounted steady pressure and did a solid job of covering his wide receivers. Sixteen of Hurts’ completions were to tight ends and running backs.

The Buccaneers set an immediate tone by marching 75 yards on the game’s first possession. Giovani Bernard got the score on a 2-yard run at the 10:05 mark of the first quarter.

Tampa Bay made it 14-0 with 25 seconds left in the quarter when Ke’Shawn Vaughn plunged in from the 1 to finish a 70-yard yard that lasted four minutes. On its next possession, Tampa Bay chewed up 53 yards and nearly five minutes to set up Ryan Succop’s 34-yard field goal that made it 17-0 with 9:20 remaining in the half.

By that point the Eagles had managed just one first down on three possessions.

The Buccaneers used Eagle turnovers to put the game away in the third quarter. When Jalen Reagor muffed a punt, Ross Cockrell recovered for Tampa Bay, and five plays later, Brady hit Rob Gronkowski with a 2-yard touchdown pass.

Two minutes later, Hurts was intercepted by Shaquil Barrett, and Brady hit Evans with a 36-yard touchdown on the next play.