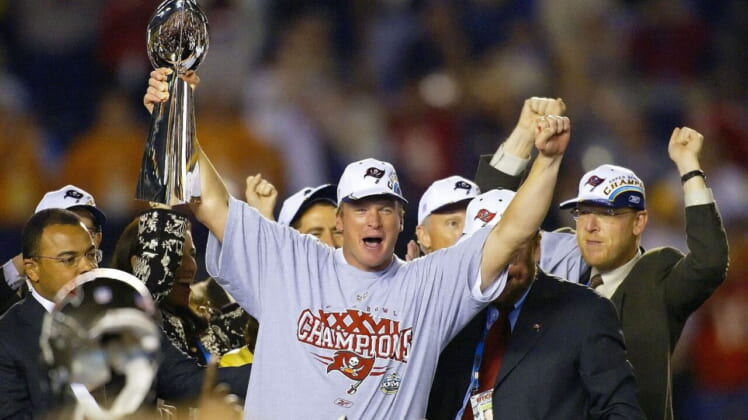 The Tampa Bay Buccaneers have returned to the Super Bowl for the first time since their matchup with the Raiders in 2003. While the Bucs enjoy the festivities that accompany this week, the Raiders get the chance to ponder over where their paths diverged.

The year was 2003 and Jon Gruden had just become a Super Bowl champion with the Tampa Bay Buccaneers. He had arrived in Florida a year earlier — the result of a high-profile trade in which Gruden commanded a higher price than many players would — and within two years had fixed up their offense to complement their dominant defense.

Gruden was only recently departed from the team he defeated in the Super Bowl, the then-Oakland Raiders, and now he finds himself back with the franchise after signing a mega-deal.

However, through the first three years of Gruden’s return to the Raiders, the team has continued to struggle, and now he’s forced to watch his old franchise return to the Super Bowl. Both the Buccaneers and Raiders have struggled since that big game, yet within the past three years, one franchise has found its way back to the promised land, while another continues to wallow away near the bottom of the division.

Why did the two franchises crumble after meeting at the pinnacle of the sport and how did the Buccaneers recover to make this year’s Super Bowl? That question remains at the heart of the Raiders journey back to greatness.

In any league with a salary cap structure, it can be hard to keep a winning group together. Players want more and can get more elsewhere after experiencing success, and thus winning groups don’t often last long together. Still, for the Raiders and Buccaneers, the fall from grace was especially sudden and harsh.

Post Super Bowl, the Raiders offense fell off a cliff as it went from second in points per game in 2002 to twenty-sixth in 2003. Quarterback Rich Gannon injured his shoulder in Week 7 and didn’t play another game the whole season, forcing a rotating cast of backups to attempt to replace his production.

From there, the decline was swift as the Raiders have only had one winning season since. That was back in 2016 and ended with a blowout loss in the AFC Wild Card round after quarterback Derek Carr was injured during the late stages of the regular season.

Inept drafting, poor free agency decisions, and unnecessary drama have followed the franchise ever since that big game in 2003 and it’s now Gruden’s responsibility to bring the team back to its former glory.

For the Buccaneers, they managed to hold onto relevancy for a few years after their big Super Bowl victory as they made the playoffs in two of the next five years. However, everything good must come to an end and this year marked the first time they returned to the playoffs since 2008.

Lessons from Tampa Bay’s Return to the Super Bowl

The Buccaneers are in the Super Bowl the first year they returned to the playoffs after a long drought. No team can copy another team’s exact moves, but they can learn from the concepts and principles behind the move and that’s exactly what the Raiders should do.

Never get satisfied and don’t be afraid to take risks

In 2019, the Buccaneers had a top-five offense going by both points and yards. While one may think that with an offense that prolific a team should focus solely on defense, Tampa Bay took a risk by bringing in Tom Brady and Rob Gronkowski and it paid off for them.

In addition to grabbing those two players in free agency, they also spent their first-round draft pick on OT Tristan Wirfs and snapped up RB Leonard Fournette when he became available. They continued to add weapons to what was already a dangerous offense and they are better for it.

You need to build a complete team to win

While the Buccaneers offense was prolific, it’s been their defense that hs been garnering headlines and winning game for them. On their road to the Super Bowl they have faced future Hall of Famers in Drew Brees and Aaron Rodgers yet their defense has come up big time after time.

While being strong on one side of the ball may be enough to win some games, to get to the championship you need to be elite on both sides of the ball.

Having more weapons at skill positions is never a bad thing

Take a look at the Buccaneers roster and their depth at skill positions is incredible. In the backfield they have multiple runners who can give them different running styles, and tight end they have Rob Gronkowski and O.J. Howard, and at receiver they have many different players who could make the Pro Bowl in any given year.

This allows the Buccaneers to exploit matchups across the field and they acquired many of these players for pennies on the dollar. Always having an eye out for available talent is important for teams so they can have the best offense possible.

Moving forward the Raiders need to take a look at how Tampa Bay built their roster and try to emulate the concepts to build up their own roster. By doing this, they may be able to break their losing ways of the last decade and make a deep playoff run, just as Tampa Bay has.