Bryson DeChambeau carded back-to-back eagles on Saturday during a frenzied third round and is tied with Patrick Cantlay for the lead at 21-under 195 heading into the final round of the BMW Championship at Owings Mills, Md.

DeChambeau parlayed the two eagles while shooting 6-under 30 on the front nine before finishing at 5-under 67. Cantlay played steadier golf at Caves Valley while shooting 66.

“It’s ultimately about winning no matter what,” DeChambeau said afterward. “Hopefully I can go get the job done (Sunday). I’ve done it eight times; hopefully I can make it my ninth (title).”

Spain’s Jon Rahm slipped from a tie for second after two rounds to eighth place. He’s five shots back after a 70.

The tournament is the second leg of the FedEx Cup Playoffs. The top 30 players in FedEx Cup points following the BMW will qualify for next week’s Tour Championship in Atlanta.

“I saw it breaking a lot, about six feet,” DeChambeau said of the putt on No. 5. “It was up the hill a bit and then went down the hill. I stroked it and hit it really good and it started on a good line and it happened to go in the hole.”

DeChambeau was 7-under for the day after a birdie on No. 11. But things disintegrated rapidly as he bogeyed No. 12 and posted a double-bogey 5 on No. 13.

After a birdie on 14, he bogeyed No. 15 before making another birdie on 16. He shot pars on the final two holes to complete the chaotic round.

“Front nine I played really good,” DeChambeau said. “On 7, I hit one right off the drive and it just didn’t feel right, and from then on just the driver seemed like it wasn’t really in tune. But that’s OK.” 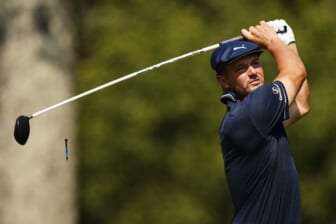 Also Read:
Bryson DeChambeau falls one shy in pursuit of 59

Cantlay registered an eagle on the par-5 No. 2 and knocked in five birdies. Four of the birdies came on the back nine, including three in a row at 11, 12 and 13. He added another at 16 and appeared destined to finish the round in the lead.

But Cantlay bogeyed the par-4 18th to end up in a share with DeChambeau.

“It was another day on an easy, soft golf course, so you needed to make a bunch of birdies,” Cantlay said. “I thought I played really well, all in all. I didn’t make too many mistakes. Played solid, didn’t putt as well as I did the first couple days but probably hit it a little better, and I thought it was a good day and I’m in a good spot for (Sunday).”

Im connected on seven birdies against one bogey in a strong third-round performance.

South African Louis Oosthuizen shot a round-low 64 on Saturday but he is well off the pace at 7-under 209.

McIlroy (seven birdies) and Burns (eight birdies, one bogey) were among five players who shot 65.

“I didn’t waste as many shots as I did yesterday,” McIlroy said. “I maybe didn’t drive it quite as good as I did yesterday, but when I put myself in position today, I was able to take advantage and make the birdie from just off the green. So I scored a little bit better. I don’t feel like my game was that much different. Maybe holed a couple extra putts.

But yeah, if you go out here and play remotely well, you’re going to have a chance to shoot a low score. I don’t feel like I did anything spectacularly well today, but just everything was solid.”

Rahm had six birdies and one bogey through 12 holes before his round crumbled with bogeys on 13 and 14 and another on 18.