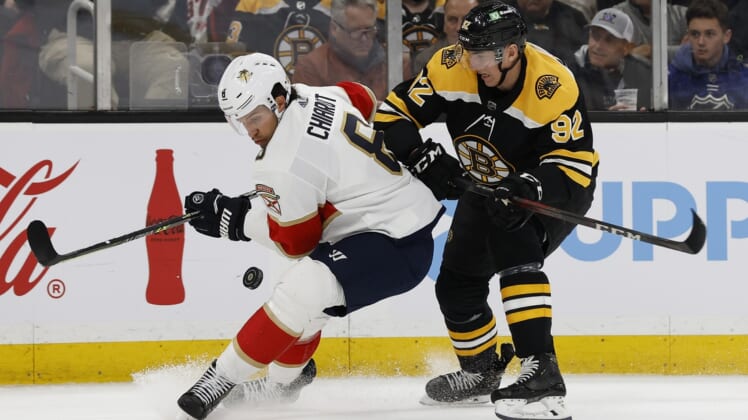 Brad Marchand and Taylor Hall each had a goal and an assist and Jake DeBrusk scored the game-winner as the host Boston Bruins were 4-2 winners over the Eastern Conference-leading Florida Panthers on Tuesday night.

David Pastrnak and Patrice Bergeron both logged two assists for the Bruins (50-25-5, 105 points), who have won three straight games.

In a first period that finished tied at 2-2, Erik Haula and Hall scored Boston’s goals within a six-second span. Pastrnak had the primary assist on each.

The Bruins gained the lead for good at 4:59 of the second. DeBrusk quickly buried the rebound left at Sergei Bobrovsky’s net front following a Marchand shot from the right side.

Marchand added an empty-netter with 3:05 left in regulation.

Linus Ullmark stopped 19 shots, improving to 8-1-1 in his last 10 decisions for Boston.

Bobrovsky made 34 saves. Boston piled on 16 of its 38 shots in the third period.

Just after a power play expired, Florida opened the scoring eight minutes into the opening period. Forsling capitalized on a loose puck turnover and slotted home his 10th goal of the season from above the left wing circle.

Boston tied the game and took the lead in rapid succession, beginning with Haula putting home Pastrnak’s backhand feed to the right circle with 3:42 left in the first. Pastrnak also set up the go-ahead tally, springing Hall for a break and a rocket from the slot off the ensuing draw.

The Bruins’ quick spurt came less than a minute after Ullmark made a key glove save on Carter Verhaeghe, who outraced Bruins defenseman Hampus Lindholm to a loose puck.