Bruins get back on winning track, topple Blues 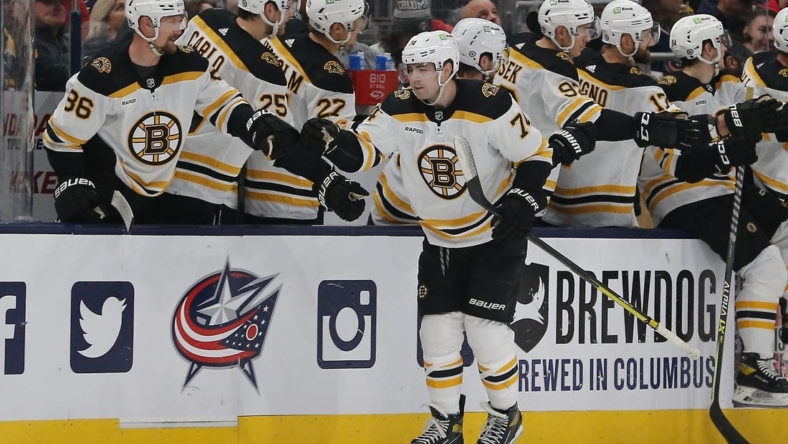 Bergeron’s power-play goal at 12:45 of the final frame broke a 1-1 tie before Frederic tallied at 16:28, helping the Bruins bounce back from a Saturday loss in Toronto that snapped a seven-game win streak.

Brayden Schenn scored the lone goal and Jordan Binnington made 34 saves for the Blues, who have lost all of their last seven games in regulation.

The Blues received three power plays within the first 10:49, but they landed just three shots on Ullmark during that entire span.

It took the Bruins only 17 seconds on the man advantage to mark the scoreboard first. DeBrusk whipped a wrist shot home after taking David Pastrnak’s backhand feed, scoring at the net front at 13:34 of the first period.

To begin the second, St. Louis had the better of the chances with a 6-2 edge in the shot department before netting the tying goal at the 11:37 marker. Schenn buried Jordan Kyrou’s pass in the low slot to finish off a tic-tac-toe passing sequence.

Ullmark kept the game tied with 4:28 left in the middle frame, denying Kyrou’s backhand attempt on a partial breakaway. It was one of the Boston goaltender’s eight saves in the second.

Boston nearly jumped ahead when David Krejci ripped a slapper off the goalpost exactly three minutes later, taking Pastrnak’s feed in stride down the right side.

After Pastrnak was tripped to draw a power play, Bergeron slotted home a go-ahead goal from the bumper with 7:15 to play in regulation. Marchand fed a pass from the far-right circle.

Frederic skated from the defensive zone, through center and into the right circle, where he snapped off Boston’s insurance goal.