Kyrie Irving and the Brooklyn Nets took out the Boston Celtics in Game 2 of their first-round matchup Tuesday evening in the Big Apple.

By virtue of the dominating win, Brooklyn heads into Game 3 against the Celtics in Boston on Friday with a 2-0 series lead as the No. 2 seed in the Eastern Conference looks to advance.

As for Irving, he’s returning to Boston after spending the 2017-18 and 2018-19 seasons with the Celtics. To say that things did not go swimmingly for the two sides during that span would be an understatement. Drama was the name of the game, leading to Irving departing the Celtics for Brooklyn ahead of the 2019-20 campaign.

For his part, Irving took time out of his evening following Brooklyn’s dominating Game 2 win to absolutely lay into Celtics fans. It was not subtle.

“Hopefully we can just keep it strictly basketball, there’s not belligerence or racism going on. Subtle racism. I’m not the only one who can attest to this. The whole world knows it,” Irving told reporters.

Well, that’s something right there. Irving is clearly claiming racism on the part of some Celtics fans days before he’s set to head to TD Garden. What could possibly go wrong?

Kyrie Irving and his relationship with Boston Celtics fans

This will be the first time that Kyrie Irving will play in Boston in front of fans since he jettisoned from the city during the summer of 2019. Prior to last season being suspended in March due to the COVID-19 pandemic, the Nets and Celtics had not played in Boston. Once the reason resumed, it was in the Orlando Bubble. And for the most part, the 2020-21 NBA regular season was played without fans in attendance.

It promises to make for an interesting scene at TD Garden Friday evening. Adding to the intrigue is the fact that less than 5,000 fans are set to be in attendance due to state COVID-19 protocols. That’s going to lead to some interesting exchanges with certain fans in Boston being heard over everything else happening. 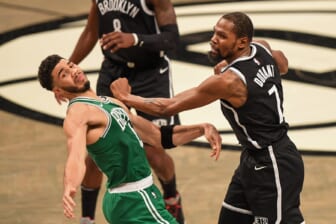 As for Boston and its “racist tendencies,” a recent poll notes that eight out of 10 Bostonians believe racism is a problem in the city. Take that for what it’s worth.

Things will get more interesting should Brooklyn open up a huge lead like we saw Tuesday evening with the Celtics facing the real possibility of falling down 3-0 in the series.