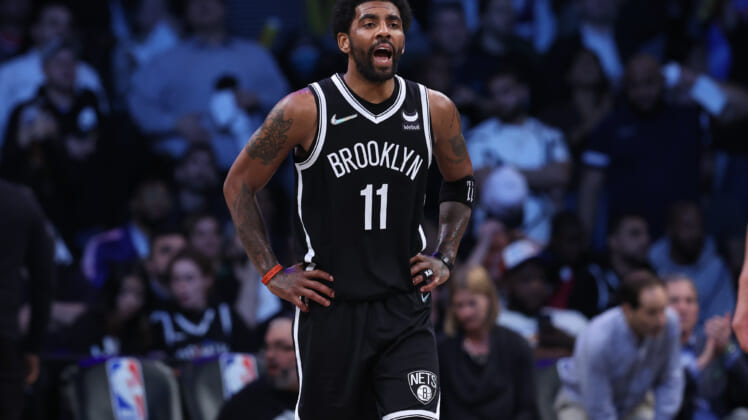 Amare Stoudemire, a member of the Brooklyn Nets coach staff over the last two seasons, says that Kyrie Irving missing games in 2021-2022 had a major effect on the team’s chances to compete for a title and made game preparation difficult for the staff throughout the season.

The Nets entered this season as a favorite to at the very least compete for an NBA championship. However, once superstar guard Kyrie Irving made it clear he would not budge on his stance to not get a COVID-19 vaccine, and New York City set vaccine mandates for indoor events, the franchise’s title hopes quickly unraveled.

The team was put in an awkward position where arguably their second-best player could only compete on the road, and that was not a guarantee in every city they visited. The situation reportedly caused a rift in the locker room and was likely key in James Harden being traded to the Philadelphia 76ers at the NBA trade deadline.

Even when mandates were lifted and Kyrie Irving was available for home games, the team never captured the magic they had at times in the 2020-2021 season. And it showed in their shocking ouster in the first round of the NBA playoffs by the Boston Celtics.

During a Thursday appearance on ESPN’s “First Take,” Stoudemire was asked about his tenure with the Brooklyn Nets, which ended in April. The former Phoenix Suns and New York Knicks star admitted during the conversation that while it wasn’t a guarantee, Irving being available to a greater degree this season would have given the Nets a better chance to win a championship.

The six-time All-Star then took his thoughts a little further, when pressured by co-host and NBA analyst Stephen A. Smith, and revealed the Irving situation “hurt” the team this season and made things hard for the coaching staff on a game-in and game-out basis.

“I think it hurt us. It definitely hurt us because we didn’t have the consistency with Kyrie enough to build chemistry for the group of the team,” he said. “He plays only on away games, depending on which city it is. Can’t play in New York, so therefore we have different lineups and different matchups depending on the game schedule. It made it difficult for us as coaches to figure out who’s going to play in spite of Kyrie. The chemistry is not quite there for how we would like it to be. It was difficult for us to manage that.”