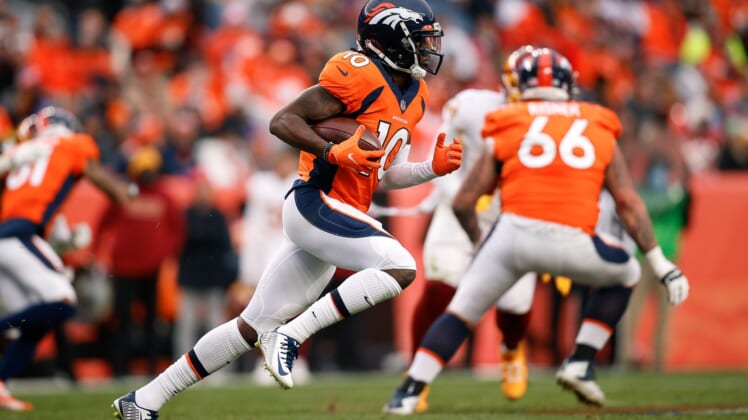 The Denver Broncos added five more players to the reserve/COVID-19 list Friday as they deal with an outbreak ahead of their Week 17 game at the Los Angeles Chargers.

Other Broncos on the list that numbers 16 include wide receiver Tim Patrick, running back Mike Boone and cornerbacks Bryce Callahan and Mike Ford. But the Broncos aren’t concerned they will be too short-handed to play.

The Broncos called up four players from the practice squad as COVID-19 replacements, including Travis Fulgham, who led the Philadelphia Eagles in receiving last season.

Jeudy has hauled in 36 catches for 437 yards this season, his second in the NFL, over nine games (five starts). Chubb has started all six of his appearances in 2021; both players, former first-round draft picks, have missed time due to injuries.

Also, starting receiver Courtland Sutton’s testing results haven’t been confirmed and he could be added to the list. The team held Sutton out of Friday’s walkthrough practice.

Defensive line coach Bill Kollar is also on the reserve/COVID-19 list, the only Denver coach in protocol as of Friday.