San Francisco 49ers star Christian McCaffrey believes the success rookie quarterback Brock Purdy has had is from being able to learn from nine-year veteran Jimmy Garoppolo.

Brock Purdy was thrust into a very difficult situation in his first season in the NFL. The man selected with the final pick in the 2022 NFL Draft was never supposed to see regular season action. However, the 23-year-old had to jump in and lead the offense for a Super Bowl contender after both of the QBs ahead of him on the depth chart went down with season-ending injuries.

“Mr. Irrelevant” 2022 should have been disastrous, all things considered, but instead he has been a revelation and taken the offense to new heights during the back half of a stunning 10-game win streak. He has posted 200-yard throwing games consistently, and most importantly, has limited his turnovers with smart decision-making.

Purdy’s play has been magical over the last few games, yet one top player on the offensive unit claims that is only happening because Brock Purdy had a very good mentor this season.

During a conversation with “49ers Talk” ahead of their NFC Wild Card matchup against the Seattle Seahawks, running back Christian McCaffrey spoke on what Purdy has been able to do despite the odds. And the one-time All-Pro said former starter Jimmy Garoppolo deserves a lot of the credit.

“Brock’s success is a major testament to Jimmy. Jimmy has handled so many things like a true pro. A lot of the things Brock does, Jimmy did. And that is from Jimmy, that it was passed on.”

While the NFL trade deadline acquisition believes Garoppolo has been highly influential in Purdy’s success, he also believes the San Francisco 49ers QB room — with Garoppolo, Week 1 starter Trey Lance, and QB coach Brian Griese — groomed the rookie to be capable of making an immediate impact. 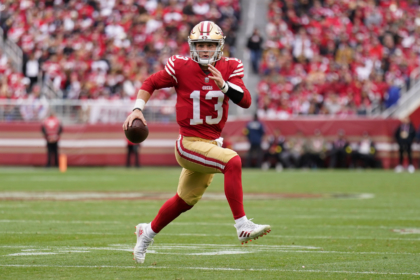 The San Francisco 49ers and Seattle Seahawks kick off NFL Wild Card Weekend on Saturday at 4:30 PM ET on Fox.