Brian Flores: Suing NFL about ‘integrity of the game’ 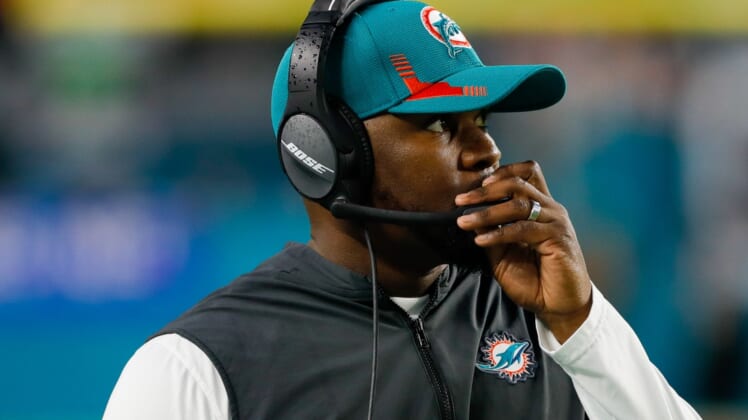 Less than three hours after former Miami Dolphins Brian Flores’ lawsuit became public, the NFL issued a statement vowing to defend against claims it says “are without merit.”

On Tuesday, Flores sued the league and its teams, contending the NFL fosters hiring processes that racially discriminate. Flores, who is Black, was fired by the Dolphins last month.

In the blockbuster lawsuit, Flores said he was offered $100,000 per loss in 2019 by Dolphins owner Stephen Ross, who wanted to “tank” to improve draft position and build a contender, and that his refusal to go along with the plan resulted in him being fired at the end of the 2021 season with a 24-25 career record. Further, Flores asserted he received a congratulatory text message from Patriots head coach Bill Belichick that plainly shows his interview with the New York Giants was “a sham.”

That’s because Belichick revealed he meant the text for another Brian — Bills offensive coordinator Brian Daboll, who was hired by the Giants — and not Flores, also a former Belichick assistant. The text from Belichick hit Flores’ phone three days before Flores would interview with the Giants.

“It was a range of emotions. Humiliation, disbelief, anger,” Flores said Wednesday on “CBS Mornings.”

“I’ve worked so hard to get to where I am in football, to become a head coach. To go on what felt like a sham interview, I was hurt.”

Flores said he grasps the notion that the suit against the NFL could prevent teams from hiring him.

“If change comes, and I never coach again, it’ll be worth it,” he said later Wednesday morning in an ESPN interview.

The Giants said in a statement Tuesday that Flores was in the running to be head coach right up until the decision was made to hire Daboll.

“We are pleased and confident with the process that resulted in the hiring of Brian Daboll. We interviewed an impressive and diverse group of candidates. The fact of the matter is, Brian Flores was in the conversation to be our head coach until the eleventh hour. Ultimately, we hired the individual we felt was most qualified to be our next head coach,” the statement read.

Seated with his attorneys in the live interview Wednesday, Flores said he wants to continue coaching but felt compelled to pursue action because his story is “not the only one” when it comes to black coaches being interviewed to satisfy the Rooney Rule. The NFL adopted the Rooney Rule to assure minority candidates were being interviewed for top NFL vacancies. In 2020, the NFL made adjustments to the rule adding requirements for interviewing minority offensive and defensive coordinators and general managers.

“This game’s done a lot for me. I didn’t grow up with a lot,” said Flores, who turns 41 this month. “To attack the integrity of the game, that’s what I felt was happening in that instance.”

In 2019, Flores said Ross made it clear losses would be very valuable to him and put a dollar figure on accepting defeat.

“That was a conversation about not doing as much as we needed to do to win football games,” Flores said Wednesday. “‘Take a flight. Go on vacation. I’ll give you $100,000 per loss.’ Those were his exact words.”

Attorneys for Flores told CNN they will present corroborating evidence of multiple claims made in the suit.

Flores’ suit asserts violation of civil rights statues or discrimination in regards to hiring and firing practices for coaches and executives.

“In certain critical ways, the NFL is racially segregated and is managed much like a plantation,” Flores says in the suit.

There is currently one Black head coach in the NFL — the Pittsburgh Steelers’ Mike Tomlin. Flores interviewed with the Houston Texans and New Orleans Saints, who haven’t named a head coach during the ongoing cycle.

Flores said Wednesday he informed the Texans and Saints of his intentions to file the suit.