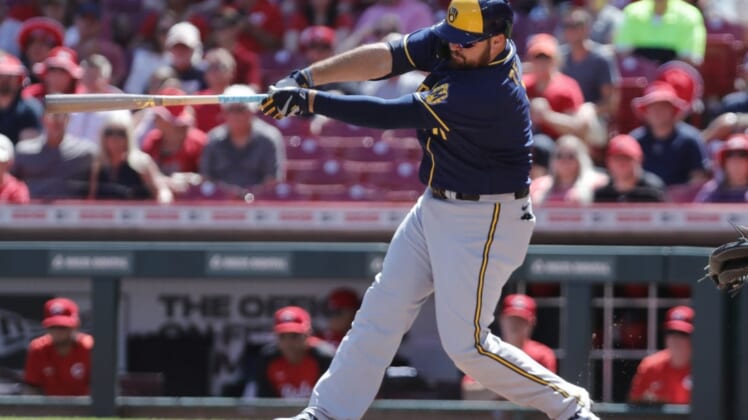 Willy Adames and Hunter Renfroe each homered for the second straight day as the visiting Milwaukee Brewers beat the Cincinnati Reds 7-3 Saturday.

The Brewers got to Cincinnati starter Graham Ashcraft (3-1) early on to hand the right-hander his first taste of defeat in the majors. The Reds had won Ashcraft’s first five starts.

The Brewers won back-to-back games for the first time since sweeping a doubleheader against the Cubs at Wrigley Field on May 30.

Rowdy Tellez put Milwaukee on top in the first with a double to center to score Christian Yelich.

Adames made it 3-0 in the third when he connected on a first-pitch cut fastball and drove it 413 feet to center for his 13th homer. Adames now has four homers and 14 RBIs in 13 career games at Cincinnati.

Ashcraft was tagged for a career-high six runs on eight hits over five innings.

The Reds put together a threat against Alexander in the third when Aramis Garcia doubled with one out. But Peterson threw out Jonathan India on a sharp grounder before Brandon Drury hit a fly to left that Tyrone Taylor dove to snare to end the threat.

Peterson’s two-run ground ball double over first base scored Omar Narvaez and Taylor to increase Milwaukee’s lead to 6-1 in sixth.

The Reds got two runs back in the sixth when Mike Moustakas just missed a grand slam to center and settled for a sacrifice fly. That was followed by a two-out pinch-hit single from Max Schrock to score Kyle Farmer.

Renfroe homered to left-center off Luis Cessa in the seventh to put Milwaukee back up four runs. In eight games this season, the Brewers have connected for 23 home runs off Cincinnati pitching.

Joey Votto went 1-for-4 in his 1,949th game with the Reds, breaking a tie with Tony Perez for fifth-most games played in club history.